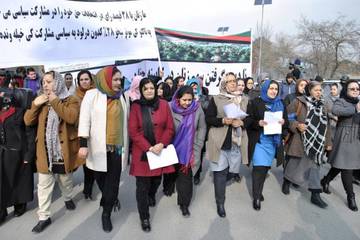 After the United Nation Fourth World Conference on Women in Beijing, China, where a group of women from various organizations and agencies of the United Nation participated; the theory to form a network for the Afghan women's cooperation and integration developed. With inspire from women's movement in different part of the world; finally, in 1995 participants (women) of the conference decided to establish Afghan Women Network (AWN). Afghan Women's Network is the foundation for Afghan women's movement, which serves as a stable network for growth of those women's organizations they are active in the country.

Afghan Women's Network has active and considerable presence in Kabul, Herat, Balkh, Kandahar, Bamyan, Paktia, Nangarhar and Kunduz, and is also active through its member in other provinces of Afghanistan. Afghan Women's Network works as the umbrella for its member organizations. As well as projects related to issues (gender-based violence, strengthening of youths and education for girls) implement with coordination of its member.

Afghan Women's Network has over then 3500 individual members and 125 women's organizations in its membership.

AWN's peace and security work is rooted in the United Nations Security Council Resolution 1325 (UNSCR 1325), which was the first resolution to address the disproportionate and unique impact of armed conflict on women. The resolution also stresses the importance of women's equal participation as active agents in peace building processes.

AWN endorses women's participation and full involvement in all efforts related to the maintenance and promotion of peace and security in Afghanistan. By monitoring the implementation of UNSCR 1325, AWN has gained a strong position in its advocacy for women's inclusion in the peace process at the decision Similarly, in Oslo Symposium – hosted by Norwegian Ministry of Foreign Affairs in November 2014 on “Women's Rights and Empowerment in Afghanistan” was the forum where Afghanistan's achievements over the past 13 years were discussed and the challenges for ensuring future progress were identified. The participants of the Oslo conference included the senior representatives of the Afghan government, parliament and civil society including representatives of 32 other governments, multilateral organizations and international civil society organizations discussed and agreed on contributing to women empowerment and gender mainstreaming across all governance bodies.

The network promotes the participation of women in the peace talks at the regional, national and international level while the network also engages in capacity building activities with Afghanistan's High Peace Council members. Further, AWN actively participates in the development of the National Action Plan (NAP) for the Implementation of UNSCR 1325 in Afghanistan.

AWN believes that women's political participation is essential to building a democratic society. However, AWN is also aware that women's socio-economic empowerment is key to their increased political participation. Through its WPPL strategy, AWN supports women to become decision maker and take on position of authority at the community, subnational and national levels. The WPP is about empowering women to overcome social and cultural barriers that prevent them from participating in society on an equal footing with men. Main activities included in the WPP are a combination of trainings and networking and lobbying activities.

Women's protection and their access to justice are among AWN's most central activities. Women and children are those that most affected by conflicts. This strategic area seeks to address and highlight the existing gender in equality and the lack of institutions and structures to protect women in Afghanistan.

Within this strategic area, AWN and its members concentrate on women's rights in family affairs, rapid response to violence against women cases and women's access to legal protection. This includes monitoring of law amendments and the implementation of women's rights laws such as the EVAW law, CEDAW, the Family law, Shia Personal law and the Shelter Regulation law. AWN also implements awareness raising initiatives in the communities while conducting advocacy and lobbying to influence decisions in favor of women's rights.

The above three strategic areas of AWN are achieved through three methods: Advocacy and Lobbying, Networking and Coordination and Capacity Building.

These are seen as interdependent methods that are essential to achieve effective result.

AWN represents Afghan women in the political and social arenas through its Advocacy and Lobbying Department. AWN, as the voice of the Afghan women, lobbies with the leaders of Afghanistan to ensure that gender perspectives and the needs of women are taken into consideration when planning and implementing national policies.

The Networking and Coordination Department of AWN strives to develop and maintain connections with a variety of key governmental, non-governmental, international stakeholders to share experience, coordinate actions, exchange opinions, explore funding opportunities, identify sources of technical expertise, and enlarge the network of women activists and advocates across Afghanistan and internationally.

AWN's Capacity Building Department focuses on building the capacity of Afghan women so that, in the short term, they are able to take active part in improving women's lives and play an important role in the rehabilitation of their country and, in the long term, regive the state institutions. AWN provides capacity building opportunities to its members and to governmental bodies via the provision of technical assistance, awareness raising, exposure visits/travel, and in-country training programs.