Georgia declared independence from the Soviet Union in 1991. Since then, it has has experienced tension and conflict in two regions, with secessionist wars fought in South Ossetia (1990-92) and Abkhazia (1992-94). These left thousands dead or displaced and created a politically unstable situation, with both regions ending up as de facto independent nations.

A ceasefire was declared in 1994, but the issues behind the conflict remained unresolved, harming economic development and sustaining difficult relations between different communities. Nonetheless, Georgia then enjoyed a period of relative stability.

In 2003, the Rose Revolution saw Mikheil Saakashvili come to power. The restoration of Georgia’s territorial integrity was one of his key policy goals. Tensions began to increase from 2004, when the Georgian government tightened border controls and strengthened the presence of military, police and intelligence personnel in South Ossetia.

These increasing tensions turned into a full-scale war over South Ossetia in August 2008, that assumed international significance when Russian troops entered Georgian territory and recognised the independence of the breakaway regions.

The exact causes and course of the events of the 2008 war remain controversial, with disagreement over who initiated the violence. But by the time a peace deal was signed on 16 August, an estimated 850 people had been killed and over 100,000 displaced.

Combined with the numbers who were displaced by conflict in the 1990s, this left Georgia with an internally displaced population of 250,000 people.

With the 2008 war further complicating the region’s political relations, Georgia’s contested territory continues to be a potential source of conflict. 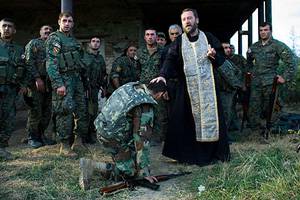