In 1983, Charles Taylor, a former Doe supporter, formed an opposition army called the National Patriotic Front of Liberia (NPFL). In December 1989, the NPFL kick-started a multi-dimensional war against Doe’s Armed Forces of Liberia and other armed groups and splinter-militias. Both ideological differences and the control of natural resources – particularly timber, iron ore and gold – were key.

Leaders of the Economic Community of West African States (ECOWAS) formed a peacekeeping force, ECOMOG, which a brokered ceasefire in 1996. This ended the first civil war.

Taylor won the next election in 1997. However, tension caused by his different irregular security services, including the Revolutionary United Front in Sierra Leone, soon sparked more violence. The opposition grew significantly in 1999 when the Liberians United for Reconciliation and Democracy attacked a Liberian town, triggering a second brutal civil war. By 2003, the Movement for Democracy in Liberia, allegedly with backing from the Ivory Coast, had irrevocably damaged Taylor’s control.

The United Nations Mission in Liberia (UNMIL) arrived in August 2003. Taylor soon resigned and was arrested in 2006. The war ended with the Accra Comprehensive Peace Agreement (ACP), leaving 250,000 dead and national infrastructure destroyed.

Ellen Johnson-Sirleaf was elected in 2005, ending the Transitional Government’s term, and began a reconciliation processes. However, Liberia’s reconstruction has been detrimentally affected by the 2014-2016 Ebola crisis, as well the drop in prices of international commodities that the Liberian economy heavily depends on, such as rubber and iron ore.

Hopes for a peaceful elections in 2017 remain with 22 political parties publically committed to non-violence. 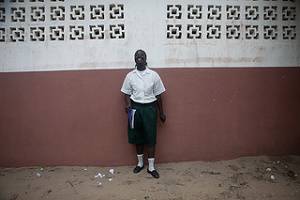