Since gaining independence in 1961, Sierra Leone has experienced unstable government and a complex civil war. It has recently been severely affected by an outbreak of Ebola.

In 1971, after the last of a series of post-independence coups d’état, Siaka Stevens gained power and declared himself president of Sierra Leone. He ruled until 1985, naming Joseph Momoh as his successor.

In 1991, pressure on Momoh and his All People’s Congress forced him to reinstate a political opposition. Despite this move, grievances concerning a poor economy, high unemployment and government corruption led to civil war, when a group of armed men led by Charles Taylor entered Sierra Leone from Liberia in 1991.

A rebel group led by Foday Sankoh known as the Revolutionary United Front (RUF) emerged and fought a brutal conflict with the government. The RUF became well known for using the country’s diamond resources to fund its operations, as well as its use of child soldiers.

Elections were held in 1996. However, despite the signing of the Abidjan Accords, a coup was staged to overthrow this regime and conflict broke out again the following year.

After UN and UK-led military operations sought to end the conflict – which formally ended in 2002 - Sierra Leone progressed politically and economically. But many issues remain to be solved.

However, Sierra Leone remains one of the world’s poorest countries. Youth unemployment is rampant in the country, and because this is seen as a key contributing factor to the start of the war, it remains a concern .

The economic woes of Sierra Leone were worsened when the Ebola outbreak reached the country in May 2014. The outbreak has had a devastating effect in the region, killing nearly 4,000 people in Sierra Leone alone.

Pre-existing issues of poverty, political conflict and the legacy of the war have come to the fore in the wake of the crisis, and the situation in Sierra Leone remains fragile. 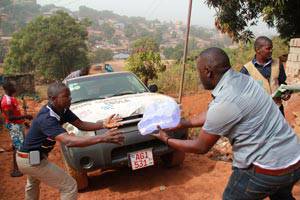