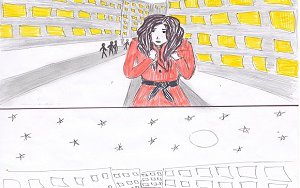 Comic-book campaigns are working to make the streets safer at night in Kyrgyzstan.
Image credit: Ainagul Amatbekova.
Society is full of problems that have never been accepted as problems
There are many social issues in Kyrgyzstan which have been ignored by society. These include a lack of respect for human rights, gender inequality, and violence towards women and children. Gender violence in particular is widespread in the Kyrgyz Republic, especially in the southern part of the country.

Various projects have been implemented to try and work on the issue, including by NGOs and governmental institutions. Obviously, social issues need be worked on in different ways: through roundtables, workshops, training and other methods.

But if the methods are different, the aims are the same: to put an end to discrimination. Some people in southern Kyrgyzstan still live according to stereotypes that are the root of the social problems in this traditional society. For instance, those which say that women have to stay at home after getting married or that housework should not be shared between men and women since women were created to do it all.

The Novi Ritm organisation, which runs a variety of peacebuilding projects, has created a group that aims to demonstrate the problems concerning gender violence through comics.

Comic makers believe that destroying stereotypes through visuals can have a good impact in the fight against gender-based violence. They create images that show social stereotypes, organise exhibitions, and hold discussions in different places. To break down stereotypes, it is necessary to demonstrate them, to understand, and to develop critical thinking, activists say. This will help to create sustainable peace without discrimination towards girls and women.

“I am able to express all my thoughts and feelings concerning significant issues that exist in my community through comics,” says Ainuska Mamatova, a fifth-year-student who is a leader of the comic-making group.

“Our society is full of problems that have never been accepted as problems, which have just been ignored.”

Ainuska had never paid attention to these stereotypes before going to Germany. When she went there as part of an exchange programme, she lived in a family where there were none of the Kyrgyz stereotypes of women: household sharing, looking after children on their own, and so on.

When she returned to Osh, she decided to find others who would support her and change Kyrgyz society.

"Street harassment is not a compliment"
Ainushka is part of the Girls’ Group at Novi Ritm, where they discuss human and women’s rights. She explains that it is hard for her to express opinions on specific topic in words.

For this reason, Ainushka demonstrates her feelings via comics, which she considers to be more influential.

"I like drawing, so when I make a comic on a significant topic, for example gender inequality, I show the issue as clearly as possible, as I have been a witness to stereotypes in my community.”

“Comics can break the stereotypes that have been following us from generation to generation,” says Bektur Saypidinov. A volunteer at Novi Ritm, Bektur was one of the boys who considered there not to be a street harassment problem before joining the “Say STOP to Street Harassment!” campaign.

This included workshops on comics concerning the harassment issue.

After taking part in the workshops, and seeing the comics of girls where they described their feelings, he decided to change his point of view.

“Now, I say that street harassment is not a compliment!”

Why did Bektur change his mind? He says that during a public awareness campaign, there was a session where boys were acting as girls and girls as boys. He could feel the feelings of girls when they were alone in the streets.

"I was confused and, and had to ask myself the question: what if it was my mother, sister or girlfriend? What if there was no one around who could protect them? I was afraid.”

Comics are a unique peacebuilding approach for the youth of southern Kyrgyzstan. I look forward to seeing more of them.

Ainagul Amatbekova is a student at Osh State University and an activist for the Public Union "Novi Ritm". She is a graduate of the School of Peacemaking and Media Technology.
Read more from Ainagul Amatbekova 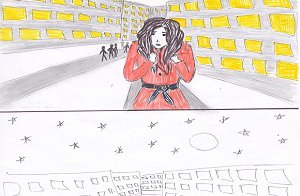