© UN Photo/Eric Kanalstein
The absence of a grassroots support network is one of the key reasons women have been unable to exert more influence in the peace process.
Two years after President Hamid Karzai’s consultative Peace Jirga and creation of the Afghanistan Peace and Reintegration Programme, the peace process continues to receive criticism for the ambiguity that surrounds the role of women. Civil society organizations and women’s rights advocates argue that a peace settlement without safeguards to promote and entrench women’s voices could threaten women’s constitutional rights.

Persistent discrimination has prohibited women from garnering a greater role in the design and implementation of the peace process. The Programme’s gender policy, introduced in September 2011, seeks to ensure women’s participation in decision-making at the strategic/political level through the High Peace Council (reconciliation) and at the operational level through gender-mainstreaming in local peace processes (reintegration). However, this policy has been largely ineffective.

The High Peace Council is tasked with leading peace and reconciliation efforts with anti-government elements, but only nine of the 70 members are women. Female members face strict travel bans. They are sidelined from the negotiation process and limited primarily to social outreach activities. According to Council member Najia Ziwari, “much work remains for society to accept and create the necessary space to engage women’s participation in the peace process.”

Women are engaged in local efforts to reintegrate insurgents through the Programme’s sub-national partners, including the Provincial Peace Committees. But women’s participation is limited by high levels of illiteracy, particularly in rural areas. Male committee members, the Ulema [legal scholars], and tribal elders show little or no support for female members. In some provinces, female committee members are restricted from traveling, participating in tribal meetings, and getting involved in the reintegration and demobilization processes.

Despite many obstacles, women have managed to contribute in innovative ways to the peace process. Female High Peace Council members are working with local nongovernmental organizations to facilitate the peace process. They engage in discreet dialogue, or “silent advocacy,” with women in insurgent households to encourage their support for the Afghanistan Peace and Reintegration Programme.

In the restive province of Kandahar, female Provincial Peace Committee members successfully organized the first-ever International Women’s Day event on March 8, 2012, with help from a local nongovernmental organization. Committee members have effectively engaged with female relatives of reintegrated personnel to offer them support. In rare cases, they have used their influence within their tribes to negotiate with insurgents.

The absence of a women’s grassroots support network or social movement is one of the key reasons women have been unable to exert more influence in the peace process. Major urban areas like Kabul, Mazar-e-Sharif, or Herat have only in the last decade developed a relatively effective network of women’s issue-based groups. Other provinces have not been as fortunate. Rural Afghanistan has been historically conservative, and, in the current security climate, it is at times inaccessible. As a result women’s movements have not been able to take root in remote areas, although a small community of women’s organizations has slowly started to grow.

Inspiring a women’s movement lodged in a strong support network of influential female personalities, government officials, informal justice providers and members of civil society organizations outside the major urban areas must become a priority. Top-down approaches such as the implementation of gender policy will struggle to succeed if a bottom-up approach is not simultaneously pursued.

The Afghanistan Peace and Reintegration Programme and female council members at provincial and national levels should focus on creating a support network of women in the provinces. Such a network could draw from village-level councils, assemblies, the Directorate of the Ministry of Women’s Affairs, and women’s civil society organizations. This approach will enable female members to utilize local women contacts to spread the message of peace in otherwise inaccessible villages and districts.

The engagement of female Provincial Council members, civil society organizations, and other officials will help build awareness of the Afghanistan Peace and Reconciliation Programme at the provincial level. Creating a mechanism at the grassroots level that increases women’s participation and voice in the peace process will draw support among a crucial part of the population of Afghanistan that currently feels vastly isolated.

This article was originally published on the Kroc Institute's Peace Policy blog. 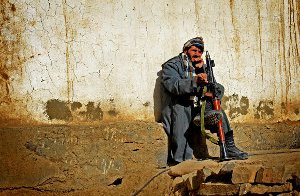