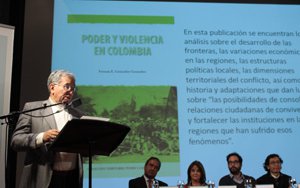 With support from the governmental body responsible for promoting research in Colombia (Colciencias), a local Colombian peacebuilding organisation brought together a dynamic group of intellectuals and activists for a packed auditorium event. The event was held at private university La Javeriana, Bogotá.

The rich collection of books and articles that Centro de Investigación y Educación Popular/Programa por la Paz (CINEP/PPP) and Observatorio para el Desarrollo, la Convivencia y el Fortalecimiento Institucional (ODECOFI) have produced over the years (2007-2014) reveal deep insights that cover the breadth of the country in all its divergent realities. Fernán González (ODECOFI-CINEP/PPP) explained how the goal of this work was to bring researchers, academics and the Church to join forces together on the different themes and impacts of the armed conflict in Colombia: “a group of friends who collaborate across interdisciplinary subjects.”

Victor Barrera (CINEP/PPP) and Andrés Dávila (Pontificia Universidad Javeriana) further emphasised this cross-sectional approach as a necessary response to the overlapping multitude of complex dynamics that drive Colombia’s 60-year civil war; a conflict that has resulted in death, displacement and violence for thousands of people within a context of armed groups and local and regional political elites.

The collection of books addresses the political violence through a range of localised perspectives that take into account the vastly distinct differences across the country. In the long FARC-controlled areas of the Pacific (Nariño) region, for example, José Dario Rodriguez (Compañía de Jesús) highlighted that focusing only on the high-intensity drug trafficking and the great poverty of the area, did not sufficiently explain the violence and insecurity that has continued to flourish throughout the years. Instead, he drew attention to the institutionalised power irregularities and corruption of the local political class that have played a central role in the conflict, issues that similarly prove relevant for the rest of the country.

The irregular distribution of power, in particular, was the centre of much discussion. Gloria Isabel Ocampo (ODECOFI-CINEP/PPP) identified three principle factors, with reference to Córdoba, that have facilitated this process: the traditional structure of the hacienda and cacique; the unstable functioning of the ruling power groups themselves (such as political elites or families); and the widespread use of clientelism at local, regional and national levels. It was agreed that all of these factors have contributed to the institutionalism of armed groups throughout Colombia, whose impacts upon the local populations also include lack of basic infrastructure in some areas - schools, education and health care. Addressing these issues from an economic perspective, Jorge Iván González (Universidad Nacional de Colombia) emphatically declared: “How is it possible that regions so rich in extractive produces such as petrol and minerals, have a population so poor?”  In response to this, Francisco de Roux (Compañía de Jesús) insisted that cultural standards of life expectations needed to be changed; however, these should not be driven by moralistic enthusiasm but rather by the people themselves and what they identified as lacking.

In terms of approach, it was unanimously agreed that realities and internal dynamics at both local and national levels be derived from talking with people; and that an interpretation, rather than judgment, be provided on the situation. Jorge Restrepo (CERAC) highlighted the fact that there have been many diverse methods for analysing the Colombian conflict dynamics over the years, yet the conflict has continued; and that in doing so, it’s impacts have caused the original roots to proliferate into many more. This has resulted in a fragmentation of causalities which are extremely difficult to follow. He finished by saying that more needed to be done to address the ways in which local power structures function with regional ones, as well as the importance of collaboration across the different sectors of the Colombian society: “We are in transition from conflict to a situation closer to post-conflict but we need to work together and study how to move into this new era successfully.”