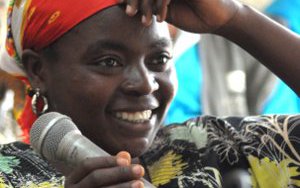 These are the only global awards for local peacebuilders - inspiring individuals who are building a better tomorrow for their communities, in the world’s most fragile places.

Past award winners have worked with ex-child soldiers in Uganda, young people from both sides in Israel-Palestine, villagers hit by drug wars in Colombia, and tribal groups in Papua New Guinea. Profiles of all past winners are here: www.peacedirect.org/tp

556 entries were received from 68 countries in the first two years of the awards, which launched in 2012. Typical issues handled by peacebuilders have included include women and conflict, young people and peace, technology and conflict prevention, business and peacebuilding, transitional justice, inter-religious reconciliation, and peacebuilding through the arts.

The winners receive global publicity and prize money. They are chosen by an international panel of experts including distinguished practitioners, political figures and media. In 2014 the panel included BBC broadcaster Bridget Kendall and former UK special Envoy for Peacebuilding Lord Jack McConnell.

It is a great honour for us to win a ‘Tomorrow’s Peacebuilder’ award. Ten years of hard work, influencing the population of Bosnia and Herzegovina to overcome their prejudices and hate, have been recognised and celebrated with the award. This is an enormous boost to our work.

Sponsors of the awards are very welcome: sponsor details are at http://www.peacedirect.org/tp/sponsorship.