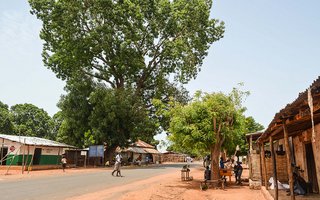 Despite recent signs of progress, political instability is again on the increase in Guinea-Bissau. Image credit: jbdodane

Guinea-Bissau is again on the eve of a coup. “It is disheartening to see that the enthusiasm achieved last year is losing steam” said a UN official recently, arguing the need to guarantee political and financial support for the extension of the ECOWAS Mission in Guinea-Bissau (ECOMIB), a security and peacebuilding mission. What a disappointment, the crisis persists. Indeed there is "some fatigue in the international community" according to Miguel Trovoada, the Special Representative of the UN Secretary General and Head of the United Nations Integrated Peace building office (UNIOGBIS) in Guinea-Bissau.

Guinea-Bissau has the highest score in political instability in the sub region. Despite the UN and ECOWAS peacebuilding missions, nothing indicates that this is going to change. On 16 March 2014 after more than a decade of political instability, murder, betrayal and power rivalry, the people of Guinea-Bissau put all their confidence into a new option. José Mario Vaz was declared president-elect with 62 per cent of the vote. Domingos Pereira, head of the Partido Africano para a Independencia da Guiné e Cabo Verde (PAIGC), was named prime minister. The two internationally recognised leaders represented a new, young generation of skilled politicians.

Sustained misunderstanding between the two main leaders led to the dissolution of the new government in August 2015 and to a serious political impasse in the executive. More recently, the President of the National Assembly expelled fifteen deputies; allegedly they didn’t vote in a way they were supposed to. The fifteen (bad) deputies were replaced by fifteen (good) ones, giving room to an open crisis in the legislative. Obviously a judicial storm followed. And finally, at this point, the judiciary is divided, trying to find some sense in this mess.

On this occasion the three Guinean “horsemen” of the permanent instability in Guinea-Bissau - the military, the drug lords and former president Kumba Iala - are innocent and free from blame. The new Guinean military leadership has renewed efforts to ensure the separation of the military from politics and to improve civil-military relations. Likewise, no evidence points the drug lords or their influence in this new crisis, although many scholars and special brigades would love this to be the case. Kumba Iala, the former president who represented an influential segment of the population in opposition to the “modern” urban elites, had the capacity to ignite local polemics. But he passed away during the last elections.

During the years, a number of skilled analysts have put on those three “horsemen” the responsibility of all evil. What do they say today?

The many faces of reality

First, Guinea-Bissau’s surface is very small. But places that look close on the map can be very hard to reach in its main coastal plain. Beautiful landscapes in awesome nature hide painful and grievous waterway access through mud and mangroves.

Second, my first local business associate was called Eurico Abderrahmane. At the time I didn´t realise that for different reasons, a number of Guineans had a Christian and a Muslim name, and this is a social norm. Frequent names like Aida Maria and Paulo Mamadu show that inclusivity and respect lie in the Guinean genes.

Third, cashew nuts are an important export product (Guinea-Bissau is the world's fifth-largest cashew nuts exporter behind India, Vietnam, Ivory Coast and Brazil). But the cashew apple, the peduncle under the nut disregarded by all business men, is the main source of income for number of women and thus is crucial for their families.

Finally, rural inlands can seem underdeveloped. But they are the heart and the spinal cord of the country. Visiting villages, you can be shocked to realise that an elder woman in a ruined house, seemingly very poor, is in fact powerful and highly respected in the community.

Reality has several faces, modernity is just one. There is always a hidden dimension that disturbs your analysis and thus will disturb your practice. Jose Manuel Ramos Horta, the former head of UNIOGBIS, thought that the job of stabilising and rebuilding Guinea Bissau was done. It wasn’t. A National Assembly with a vast majority might ignite a stable government. It didn’t. Wrestling is the national game of Guinea-Bissau. With an uncertain future ahead, could leaders and practitioners take inspiration from the rules and respect of the game?. Image Credit: Tomas Serna.

After the donor round table in Brussels, it seemed like it was time for Guinea-Bissau to rebuild itself. In the following months, the President, the ex-Prime Minister and the President of the National Assembly considered that they had the solution for the country; that they knew what was needed, the key issues and how to manage them. But in Guinea-Bissau the only right word is the one that considers all the others; including the discordant and the incongruous. If you disregard the old woman, the cashew apple or the second name you´ll fail in your analysis, and your practice.

Green development in Guinea-Bissau is possible through meticulous inclusive managers of (bio)social diversity, and not through empowered leaders of a game of thrones. Policy makers and practitioners should take inspiration from wrestling, the national game. It is a nice one, it invites you to be humble, to learn from your opponent, respect them and play by the rules.