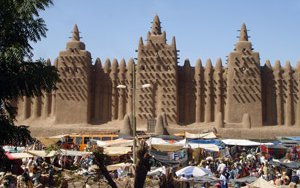 A Beninese peacekeeper from the UN Mission in Mali, MINUSMA. Image credit: UN Photos.
Daniel Ozoukou, Peace Direct’s Local Correspondent for Mali and the Ivory Coast, recently spoke to Abdoul Aziz Ag Alwaly, the Programmes Coordinator at Malian peacebuilding organisation TASSAGHT. They discussed TASSAGHT's work, the current situation in Mali, and what needs to happen for a lasting peace in the country.

Please could you give us an overview of who you are and what you do.

My name is Abdoul Aziz Ag Alwaly, and I’m the Programmes Coordinator at TASSAGHT. We were founded in 1988; many people in Mali speak Tamasheq, and tassaght is a Tamasheq word meaning “link” or “connection.” We were the first national NGO to establish an office in Northern Mali, which is in Gao. We believe that without peace there can be no development

How did TASSAGHT come into being?

It was created as an association by several young Malian graduates in 1985, to help rural communities in northern Mali affected by drought the year before. These young people had previously volunteered with organisations including SECAMA (Caritas, today) and World Vision International. In 1988, this organisations was registered as an NGO with the help of SECAMA and the Malian state, who had taken note of our commitment to contribute to local development in Mali.

You recently organised a large peace and reconciliation campaign in Gao. What kind of impact has it had?

This project worked to bring conflicting groups and communities together. It organised and conducted meetings between and among different communities, with discussion groups taking place about local sources of tensions, in particular over local resource use. Preparations were also made to support the establishment of monitoring bodies to follow up on the meetings. In general, this has helped to restore confidence among those who took part. Incidences of violence have decreased and we are working on shared resource development projects.

How did TASSAGHT respond in the aftermath of the eruption of violence in Mali in April 2012?

We immediately helped raise awareness of how local community members could help calm the situation down. We worked to bring groups together and remind them of their common social ties, and tried wherever possible to bring groups which were fighting to the negotiating table to help prevent further violence.

What challenges do you and others face in trying to reconcile communities in the areas occupied by the rebels in northern Mali in particular, and in the country in general?

Restoring social and community cohesion is the main problem. Reestablishing social ties and justice will take a long time. We must privilege social justice based around pre-existing links, and the similarities, not differences, between producers of different products, between communities and between different ethnic groups. Traditional conflict prevention and management mechanisms should be strengthened. To this end, we continually raise awareness of and advocate for the importance of peacefully resolving disputes across Mali. This is the core of what we do. To that end, we have organised intercommunity meetings in Itillit and Tinhamma, which helped end two conflicts between nomadic communities. We have also helped develop and implement several local resource management agreements in the Gao region. What do you think of the peace negotiations currently taking place in Algiers?

They have the potential to reach an agreement shared by all and applicable by all, as civil society wanted. If it is signed, it could bring a lasting peace to Mali, if both parties respect their commitments towards implementing it and involving civil society. Local people consider social cohesion to be indispensable to all their development plans.

Restoring trust is the best way to create impact. Doing that in different areas has allowed us to help people and goods to move freely, and coexist despite the conflict which continues around us.