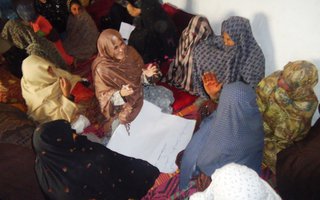 A family law seminar for women, many of whom have no formal education and are rarely allowed outside of their homes
Many of the women who complain about their lack of access to justice tend to be the wives of the same village elders who proclaim that women face no such lack.
The contrast was striking. Village elders and government officials of Kandahar’s Zhari district were gathered to discuss women’s access to justice, and the elders sang the same song in the same key. Yes, women have access to justice, they recited in turn. I myself see women who come here to court, prosecutor and other offices to demand their rights, said one. Of course, women have access to formal justice and can bring their cases and complaints to district and the court, said another. Ours is a cultured society and we are Pashtuns, so the formal justice actors have exceeding respect for women and solve women’s problems before the men. Concluded a third: works should be done for public awareness, women should get information about their rights and duties, and there should be women in the formal justice system so our women have someone to complain to.

Curious, as it was only the previous day that the same discussion was held with the women of Zhari, and they sang a different song altogether. We think women have less access to the formal justice system, because the men do not allow us to go to such places as the district center, they recited in turn. They think it a disgrace for women to go to these places, said one. They say we are Afghans and our honor does not accept such a thing. Said another: there are women who cannot raise their voice because of unfair customs. If a man were to allow a woman to refer a case to the formal justice system, the other men would taunt him, saying look, here is the coward who let his wife out of the house. Concluded a third: workshops and discussion sessions should be arranged for Mullahs and men, so that they realise that going to the formal justice system is not such a disgrace.

Many of the women who complain about their lack of access to justice tend to be the wives of the same village elders who proclaim that women face no such lack.

Sadly, divergent accounts of local dispute resolution in Afghanistan is a rather common theme in the field reports of USAID’s local peacebuilding efforts in Afghanistan’s rural and generally insecure areas. Here I refer to the Rule of Law Stabilisation Programme – Informal Component (RLS-I), funded by USAID and implemented by Checchi and Company Consulting.

Survey data seconds that emotion. Six years of national polling by The Asia Foundation indicates that, while traditional, non-state dispute resolution is clearly preferred to Afghanistan’s fledgling state justice system, Afghan women have both a more positive view of state justice and a dimmer view of informal justice relative to their male counterparts.

RLS-I’s own evaluation data is more specific: in surveys of Afghans who submit to the mediation efforts of local elders of various sorts in order to have some conflict settled, female disputants assess their experience anywhere from 5-30% lower relative to males, on dimensions of due process, corruption either from external actors or from the mediators themselves, and the overall justice of the outcome.

It may be that the social desirability bias in our data comes from the men much more than the women, but this gender perception gap is consistent with a great and varied body of evidence pointing to lower access to justice for Afghan women, regardless of whether the mediator is a district judge or a village elder.

It’s not all bad. In fact, RLS-I receives a steady litany of anecdotes of women who, after receiving education and encouragement, feel emboldened to intervene and “de-escalate” petty village dramas before they turn into some horrific blend of a generational blood feud between neighbouring families and a daytime talk show love quadrangle.

RLS-I strengthens informal justice against Taliban justice encroachment and nudges the informal toward a slowly-expanding state justice system
Both elders and respected women are restoring women’s rights to inheritance granted under Shari'ah and Afghan law but typically ignored by custom or deliberate practice. And both elders and citizens are responding to messaging that giving away girls in marriage – whether to settle a debt, halt further bloodletting in a serious conflict, or merely bring income to parents whose livelihoods are at permanent risk – is neither legal nor Islamic (See here for a retrospective account of a recent brouhaha over a 6-year-old girl and a $2,500 debt).

More formally, RLS-I evaluation data suggests that an elder who passes through our full curriculum of seminars on legal rights and protections in Afghan constitutional law and Shari'ah improves his legal knowledge in the neighbourhood of 14%, while Afghans with local conflicts they’d like to settle peaceably improve their assessment of their experience with local elders by 31% for due process and 25% for overall justice of the outcome.

Citizens who receive our outreach material are 15% more likely to affirm that giving away girls in marriage is illegal and un-Islamic, and exhibit a 9% boost in general knowledge of their legal rights to boot. There is some indication that RLS-I might even help narrow the gender justice gap, but that remains to be seen.

RLS-I strengthens informal justice against Taliban justice encroachment and nudges the informal toward a slowly-expanding state justice system, all while addressing and mitigating the women’s rights concerns associated with a male-dominated forum. The situation is grim in places and more hopeful in others, but we’ll keep trying to make it more hopeful everywhere. That’s all peacebuilding is sometimes.

Dan Killian is the Monitoring and Evaluation Advisor for RLS-I. The views expressed here are his own, and do not necessarily represent those of Checchi and Company Consulting, USAID, or the United States Government. Hat tip to RLS-I Reporting Specialist Lise Liezenga for noticing the contrasting field reports highlighting the gender perception gap in local conflict resolution.
Read more from Dan Killian 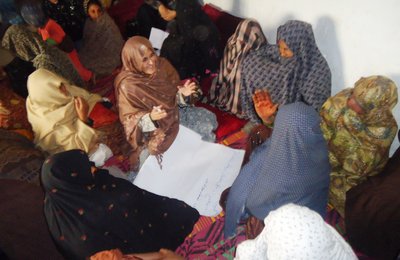