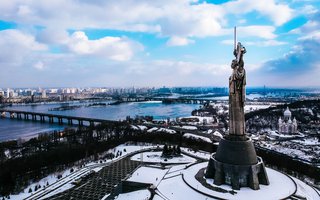 Denys Rodionenko via Unsplash
Protestors in Kiev in December 2013. The conflict in Ukraine has seen many local NGOs refocus their activities to support those affected by violence. Image credit: Sasha Maksymenko.
Local NGOs have refocused their pre-conflict activities to help those affected
Despite its short history as an independent country, Ukraine has a long history of crisis.

Two ‘Maidan’ revolutions – which have seen drastic political changes, the annexation of Crimea, and armed conflict – have changed country and community.

The second of these led to a reset and breakthrough in building a new civil society in Ukraine. Following the ‘revolution of dignity’ in Autumn 2014, the state was unable to exert control over the situation and the processes underway in the country. Ukrainians who had the day before been protesting were inspired by the new dawn’s opportunities, to make changes and map a new direction for the whole country. They took the initiative in their hands.

The feeling of freedom and independence from the state gave Maidan activists an understanding that they were forming the foundation of a completely new civil society, focused towards Western Europe.

It was not the state but they – individuals and groups of activists – who were the first to start providing humanitarian help to the conflict-affected population in Crimea and Donbass. They also initiated the economic and social integration of displaced people in new communities. The accumulated efforts of these activists united to take the first steps towards restoring peace in the community.

Reacting to the conflict, most of the existing local NGOs refocused their pre-conflict activities to help those affected. Later, these volunteer initiatives formalised themselves into structured organisations, establishing charitable foundations, civil organisations and other NGOs.

International NGOs faced an unusual situation as the context in Ukraine differs from environments they are used to working in. Ukrainians in local NGOs are very capable and qualified, and run a lot of initiatives that international NGOs would do in similar situations in other countries.

Most NGOs work on sheer enthusiasm
The economic crisis had a big influence on people’s ability to help. But despite the shortage of volunteers, activists got involved in the process of rehabilitating and integrating displaced people, as well as helping combatants.

Financial problems and disillusion with the decisions of politicians have challenged this new generation of free-spirited people. But despite this, they did not give up or withdraw. Although they sometimes had to pause, they still made efforts to provide aid and build peace through social and economic adaptation. Their NGOs have initiatives and drive: for humanitarian help, adaptation, reconciliation and advocacy. They lobby for resolutions and laws to benefit those affected and protect their rights. And local peacebuilding NGOs monitor the needs of people in conflict zones and violations of their rights, providing updates from the field to support their calls for legislative changes.

There are other challenges as well, including customs restrictions on bringing humanitarian aid from abroad, bureaucracy and bribery. Reforms on tax and custom regulations are urgently needed to facilitate the work of organisations and help bring aid from abroad. In a welcome development, the Ukrainian Government is considering changes in regulations to simplify the processes of establishing and managing NGOs.

Most of the NGOs work on sheer enthusiasm. They receive grants and partner with local and international organisations. Most international grants are for the reintegration of IDPs with their communities and to provide humanitarian support for people in conflict areas. There are a lot initiatives to support local NGOs through workshops, capacity building, management training, legal issues and – importantly – how to secure new grants. But civil activism is at the stage of transferring to social entrepreneurship. This idea was in the air a long time ago, but recently more and more NGOs and volunteer organisations are developing this type of activity. Instead of depending on grants and distribution from international NGOs, they are seeking to earn their own money.

Indeed, the crisis in Ukraine has facilitated lots of productive activity in a society with a strong sense of community and patriotism. Following Maidan, the crisis in Crimea, and the armed conflict in Eastern Ukraine, a lot of new NGOs were established to support Ukrainians regardless of their political views – in addition to those which already existed. Civil society has never been this strong, nor united, nor had such volunteer support.

Mass movements and the potential for unrest

More than 1.5 million people have fled the conflict
However, at the same time, the extra support for and attention to affected groups can create tension and hostility towards IDPs from other vulnerable people in their host communities – and as of September 2015, more than 1.5 million people had fled the conflict to other parts of the country. Peacebuilding efforts should be directed at supporting their social and economic integration, to ensure sustainable peace in their communities.

This crisis has proved Ukraine to be a nation striving for freedom and unity. Time will tell if the increase in civic activity is an evolution or a revolution. We must work so that, be it a sprint or a marathon, the impact is felt in the struggle to build long-term peace in Ukraine.