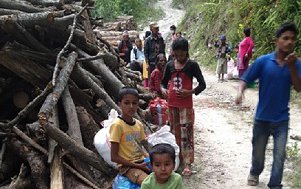 Rebuilding villages from the ground up

In the wake of Nepal's mega-quake, we have been visiting affected areas. Under the instruction of our colleagues on the ground, we first headed for the isolated village of Mahadevisthan, 35 kilometres from Kathmandu. From the road, the vastness of the destruction was evident; roadside villages were overwhelmed by rubble and devastation. Dandagaun of Mahadevisthan has no main connecting road, making it highly inaccessible. The acute isolation of this village has hindered the delivery of bare essentials, aggravating the humanitarian crisis at hand.

The lack of sanitation and communal living is yet to cause significant health problems in the village, but with the monsoon season just around the corner the situation is likely to worsen. Cholera will almost certainly arise in some devastated rural parts of Nepal, where medical facilities are limited and communal water systems are easily contaminated. The hot and wet conditions expected in the months to come provide the perfect conditions for waterborne diseases to thrive. Relief is desperately needed
It was evident from the visit to this village and from the reactions of its inhabitants that immediate relief is needed. Without the bare necessities, it will be chaos. The food we delivered will sustain the village for at least 10 days, by which time we hope that government support will have reached the community, and a sense of normality will have returned to daily life.

Our next port of call was the district of Rasuwa, where we visited the villages of Laharepauwa and Dhaibung. We were greeted on arrival with silk scarves, a kind gesture of gratitude from the villagers. Houses in these villages are scattered around the hills, thus making them difficult to reach. The villages are mostly inhabited by Tamangs, a marginalised group. Rather than distributing the supplies ourselves, the size of this village rendered it more effective to leave supplies in the communal hall, allowing the villagers to distribute the supplies amongst themselves. We were pleased to see that both villages still had access to running water, despite the damage. As in Dandagaun, our aid was warmly received, and was the first of its kind since the devastating earthquake 11 days before. This time we also brought 22 tents, as the village was lacking in sufficient temporary shelter for all its members. We left the village in the knowledge that our work there was vital, but that there was far more to be done long-term to help rebuild this broken community.

Rebuilding infrastructure will take time; the worst hit villages tend to be scattered, poorly connected and lie within mountainous terrain, making them highly inaccessible. Furthermore, many of the roads to these areas were completely destroyed by the quake. The monsoon is likely to see a worsening of this situation if roads are not repaired in time, as heavy rains frequently induce landslides in the area. The rural villages that we visited do not produce sufficient food to sustain the whole village, and therefore are partially dependent on supplies being transported from elsewhere. Road blockages inhibit the flow of goods into villages, heightening the fragility of the situation in rural parts.

Next steps: what action is needed?

It is estimated that 200,000 people are currently living under the open sky
In the months to come, shelter, food, water and medication are likely to be the most pressing needs of the people of these districts. With eight million people badly affected by the earthquake, certain things deserve the urgent attention of the government and other stakeholders: With regards to schools, special consideration must be given to Dalit children, and to the children of other marginalised communities. Dalit families typically have few or no assets of value, and are therefore excluded from compensation measures in Nepal. This further pushes them into poverty and deprivation, consequently impacting upon their children’s education. Many children have lost their educational materials and school uniforms in the debris, and the fragile financial situation of their families impedes the likelihood of the replacement of these essential items. Consequently, many children will drop out of school completely if not helped. Discussing her son, a woman from Dandagaun of Mahadevisthan attested: ‘he will go to school next year only, as we can not afford to buy school books and uniforms this year'. Once children are out of school, it is difficult for them to restart their studies.
Our visits to the districts have helped us to identify children as the most vulnerable group in these already marginalised communities
Our experiences in these rural villages are reminiscent of so many others; cities such as Kathmandu have been able to get back on their feet since the quake, but rural Nepal remains in the midst of a crisis incomparable to anything in living memory in the region. From what we saw, it is clear that basic items are most needed. Once the immediate demand for food supplies has been met, villages need to get back en route to sustainable recovery.

Our visits to the districts have helped us to identify children as the most vulnerable group in these already marginalised communities. For a sense of normality to return, it is important that funding is available for school books, uniforms, and other basic but essential items such as pens and paper, which were lost in the destruction. The provision of these items will facilitate the return to normality that is so essential for children in the wake of a crisis. Schooling can provide stability for children, and it is essential that children are able to continue their studies, despite the adverse circumstances witnessed in rural villages.

Nepal Peacebuilding Initiative has been providing emergency supplies to the victims of earthquake in Nepal. It plans to help children of marginalised and dalits to go back to the schools. Please support if you can at the following link: https://www.gofundme.com/tufrew.

Nepal
Disclaimer: The views expressed in this article are those of the author and do not represent the views or position of Peace Direct. 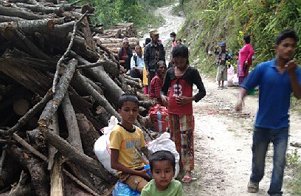 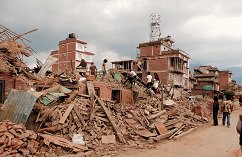