Thanks to these tools and the social and organizational forms they help create, local peacebuilders are now better equipped to challenge state-sanctioned or socially normative narratives and notions of identity.
This week, the Coalition Centre for Thai Violence Watch (CCTVW) is busy aggregating reports sent in from the streets of Bangkok to calculate a weighted index of violence risk, which will be published on their website and Facebook pages twice a day. The violence watch system is already very smart, and next week I’ll be joining a developer from Elva (a Georgian tech start-up) to work with the CCTVW team to make their processes and tools even more efficient. Every time I do work like this, bringing technology tools to local peacebuilders, I am reminded that highlighting this area of peacebuilding work was the impetus behind the Build Peace conference.

Rodrigo Davies, Jen Welch, Michaela Ledesma and I set up Build Peace to bring together practitioners, activists and technologists from around the world to share their experience and ideas on using technology for peacebuilding and conflict transformation. The conference had four broad lines of inquiry, each representing a function technology can play in peacebuilding: information, communications, gaming and networking. You can read more about how we came up with these four areas here and read a look-back on Build Peace 2014 here.

The variety and depth of experience shared at the conference demonstrated that technology use is on the rise in local peacebuilding. That alone was inspiring, and generated enough interest that we will be organizing another conference next year. But perhaps more important is the over-arching narrative that these disparate experiences share: we are beginning to see alternative infrastructures for peace emerging that are (to a large extent) the product of tech-enabled initiatives.

Digital media offers tools for collaborative media creation and dissemination: social media, blogs, wikis, citizen journalism, participatory maps, etc. Local peacebuilders are using these tools to bring new voices to the public domain. In Lebanon, Search for Common Ground ran a video competition that asked Lebanese youth to ‘Shoot [their] Identity’. Videos showcasing a diversity of experiences were posted online, with a prize awarded to the best video. In Israel, the Peace Factory runs viral campaigns on Facebook that encourage people to post messages of love and friendship across conflict barriers (Israel-Iran, Palestine-Israel, Pakistan-Israel, America-Iran, etc). In Sri Lanka, Groundviews is a website for citizen-journalists to offer alternative perspectives on governance, human rights, peace building and other issues. The site is credited with being the only source for controversial topics linked to the conflict and the only media outlet regularly challenging attitudes towards peace and conflict.

Online and SMS platforms can be used not just to transmit messages instantly, but also to form longer term relationships and regular exchanges (that may remain digitally-focused, or spill over into offline, in-person interactions). Local peacebuilders are using groups on social media, mobile chat rooms and dedicated networking platforms to nurture exchanges between groups that are divided by conflict lines. Soliya’s Connect Program is an online cross-cultural education program targeting young people in the West and in “predominantly Muslim societies.” Soliya facilitators accompany groups of ten students who meet online to talk about everyday life and culture, but also about controversial social and political issues. Run by the Parents Circle – Families Forum, Crack in the Wall is an online platform for conversation and engagement between families who have lost a family member as a result of the Palestinian-Israel conflict. The platform organizes “Round Tables” for facilitated (and translated) conversation and also gives users the opportunity to watch videos uploaded by others showing their daily life, and to upload their own. In Cyprus, UNDP has built an online community of people and organizations working to transform the island’s frozen conflict. Mahallae records the history of peacebuilding and provides a space for collaboration on innovative projects. From technology, to civic engagement, to peace

Powerful technology tools are increasing in the hands of local peacebuilders, and this is resulting in a proliferation of innovative initiatives. But does this collection of technology for peace initiatives really constitute an alternative infrastructure for peace, comparable to larger, better resourced and more traditional peacebuilding institutions? Daniel Kreiss describes socio-technical infrastructures as “the technical artefacts, organizational forms, and social practices that provide background contexts for action.” As a technical infrastructure, technology for peace is a series of tools that allow local peacebuilders to communicate with more people in more ways, collect better information and sustain relationships on digital platforms. As an organizational infrastructure, it is a means by which communities build new participatory processes, foster deeper collaborations and assume collective responsibility for building peace. As a social infrastructure, it circulates ideas and creates consensus about the importance of civic, grassroots engagement in peacebuilding.

What’s really interesting about tech-enabled peacebuilding initiatives is that they shift the balance of power. Thanks to these tools and the social and organizational forms they help create, local peacebuilders are now better equipped to challenge state-sanctioned or socially normative narratives and notions of identity. Technology can shape the future of local peacebuilding. The Build Peace team has set up a small organization – Build Up – that will focus on supporting the emergence of these alternative infrastructures.

As we look into the future, there is one question that I’m still wondering about. How will these alternative infrastructures work with more traditional infrastructures for peace? Or as my colleague Rodrigo likes to ask: can an alternative method of getting something done not only get it done, but also exert influence on an existing (sometimes broken) method?

Helena Puig Larrauri is a peacebuilding practitioner, focusing on the use of technology to promote peace and prevent conflict. She is a co-organizer of Build Peace and co-founder of Build Up, and she is on the Board of Advisors of the Standby Task Force, which she co-founded in 2010.
Read more from Helena Puig Larrauri 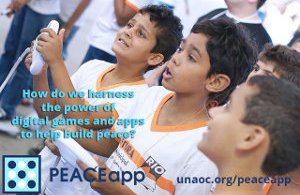