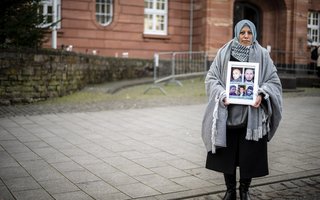 Like many families of the missing and disappeared in Syria, my family has endured years of suffering. I was the only girl among six brothers who surrounded me with so much love, and in such a short time I lost five of them. They were either killed, forcibly disappeared or abducted, vanishing without a trace.

First, my brother Zouhair was killed during the protests against the Syria regime in the beginning of 2012. Then, two months later, my brother Oqba was detained and disappeared by the regime. My brother Obaida was killed by a sniper a few months later, while working as a medic saving lives of those wounded under the rubble. Next, a sniper killed my brother Tishreen when he was at home.

All these tragedies happened to us in a span of 10 months in 2012, but it didn’t end there. In mid-2014, my youngest brother, Bashar, was kidnapped by ISIS in Deir Ezzor and has been missing ever since.

My brothers left behind 20 women and children whose lives were completely destroyed. We were left with no choice other than to flee our home and leave everything behind.

It was only after I fled to Turkey that I learned the fate of my brother Oqba. I recognised him among the thousands of photos of tortured corpses leaked by the defector Caesar in 2015. 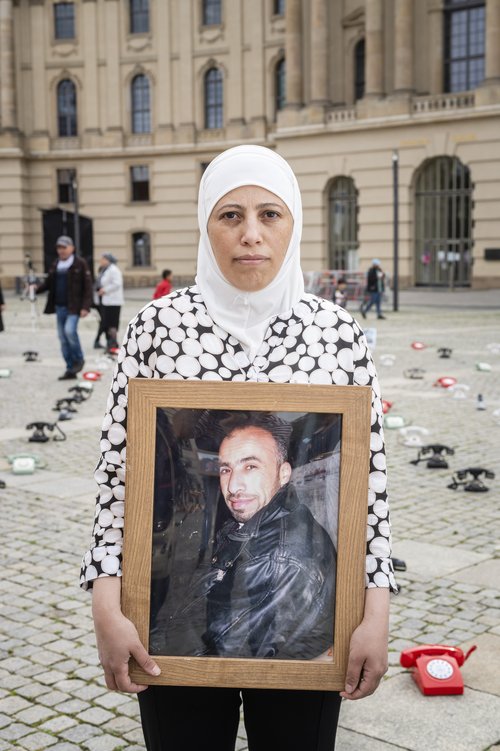 What happened to my family could have been avoided if we had only discovered Oqba’s fate at the moment he had been killed. We could have escaped – instead we stayed in Syria, waiting for him to return until through the leaked Caesar photos revealed he had been killed before Obaida and Tishreen, and before Bashar was abducted. But the past is the past, and the most important thing now is that we must not be late to help other families avoid a similar fate.

Justice for the missing

That was the beginning of my journey to seek justice. With a group of families like mine, we founded the Caesar Families Association (CFA) and became involved in collective work with other groups of survivors and families of the detainees and disappeared in Syria.

Together, we launched the Truth and Justice Charter, outlining our common vision for justice with several key demands. One is to establish an international body dedicated to uncovering the fate and whereabouts of tens of thousands who remain forcibly disappeared or missing in Syria.

An international institution could: help to establish teams to offer legal and administrative support to spouses and families of those forcibly disappeared; receive and process existing and future requests of missing persons; and enable women who have lost their husbands to obtain official documents.

Enforced disappearance is an international crime.

After years of silence from the international community, in August this year, the UN Secretary General’s report recommended the creation of such a mechanism. This came after months of lobbying and discussions between the Office of the High Commissioner for Human Rights and family and victim associations.

They now have a clear understanding of the challenges that families face. Establishing this institution would be a key step forward for those who have been waiting so long.

Families and victim groups like CFA have played an important role in developing the vision for this mechanism. The Secretary General’s report took into account the methods we have already developed – with minimal resources – to help some families uncover the fate of their loved ones.

For example, CFA developed special software that recognises faces – sparing families the pain and trauma of having to search through the entire collection of Caesar photos.

Another victims’ group, the Association for Detainees and the Missing of Sednaya Prison (ADMSP) collects and analyses information from survivors of detention and defectors. So far, they have discovered the fate of more than 200 disappeared people.

Enforced disappearance is an international crime. In Syria, where tens of thousands of people remain forcibly disappeared or missing, it remains an ongoing crisis. The journey to disclose the fate and whereabouts of Syria’s disappeared will be long and complex, particularly given the lengths to which perpetrators will go to hide the evidence of their crime.

They have destroyed the bodies of the disappeared, by burning them, and throwing them into wells or unmarked mass graves, as happened in the Tadamon massacre. This complicates the process of discovering the fate of those killed – identifying bodies requires exhumation and forensic analysis as well as a unified approach. The size and complexity of the crisis make it impossible for small groups like ours.

Having one institution that can unite the multiple efforts aimed at revealing the fate of the disappeared and preserving evidence is crucial. It would also help to significantly reduce the suffering of victims’ families, by providing one centralised place for families to turn to when they seek answers about their missing loved ones.

An international independent mechanism would have the capacity to gain trust and gather expertise and resources within one framework. It would also be able to communicate with all the relevant authorities across Syria to gather as much information as possible about those forcibly disappeared.

After my brothers were gone, I could have easily surrendered in the face of tragedy, numbed by loss. Instead, I have decided to honour them by fighting for all families of the disappeared.

Today, we as a victim group are working together to speak out in a coordinated and harmonious way. We have the power to express our vision and our demands. We urge the international community to throw its weight behind the international mechanism for Syria’s disappeared and to ensure the UN Secretary General’s recommendation is implemented swiftly.

Yasmen Almashan Yasmen Almashan is a Syrian activist and co-founder of Caesar Families Association, where she continues to campaign and advocate for justice for her brothers and all Syria’s detainees and disappeared.
Read more from Yasmen Almashan