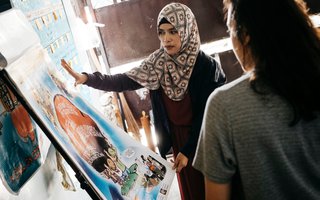 Trust has to be the centre of transformation

At Peace Direct, we work exclusively with local partners. We have no country offices and employ no expat staff, as we believe that country offices, however well intentioned, displace and often undermine local efforts.

We were founded with the firm belief that the international humanitarian, peacebuilding and development ecosystem of actors was flawed in its preference for externally-led and top-down interventions. We felt that a transformation of the system is long overdue to achieve sustainable peace and development. Almost twenty years on and our commitment to this idea remains undiminished.

We were founded with the firm belief that the international humanitarian, peacebuilding and development ecosystem of actors was flawed in its preference for externally-led and top-down interventions

Brilliant work has been done by the START Network, Adeso, the NEAR Network, #CharitySoWhite, the Global Fund for Community Foundations and many others, including new initiatives such as Bond’s sector catalyst programme. We are being challenged to do more and do better to transform the way we think and work, as well as how we see our roles as humanitarians, development practitioners or peacebuilders.

The deepest of the roots that we are only beginning to tackle is the problem of structural racism, words that for too long have been taboo in our sector. The Black Lives Matter movement has taught us many things, including our own complicity in structurally racist thinking. This thinking shows up in many ways, including the notion that local communities and groups can’t be trusted, either because they “lack capacity” or the right project management skills, are inherently biased towards particular identity groups and are more likely to commit fraud. Such thinking can no longer be tolerated.

The Black Lives Matter movement has taught us many things, including our own complicity in structurally racist thinking

How to start shifting power to local actors

In November, together with Adeso, the Alliance for Peacebuilding and Women of Color Advancing Peace and Security, we held a global consultation online to canvas the views of local activists on the “decolonising aid” debate and where it should go next. It was sobering to read so many examples of how local activists have been sidelined and marginalised by INGOs and donors in their own country. Many people commented that mistrust of local organisations is hard baked into the system.

One of the most eloquent and articulate pleas came from Catherine Martha Agwang, founder of the Uganda Youth Development and Training Programme. She asked donors and INGOs to do four things:

These four requests are a reminder that we need to do so much more to genuinely shift power to local actors. Through the Bond sector catalyst programme, a small group of us are exploring ways to do this and its already quite clear just how interconnected and complicated the problems are.

But as Catherine Agwang says, trust cuts through complexity, and so if we are in search of new approaches let’s first ask those who we claim to serve and trust them when they develop their own plans. I’ll be aiming to put this into practice in my own organisation, and I hope it’s a New Year’s Resolution that you might consider too.

More on Culture, media and advocacy, Development, and Sustainability →