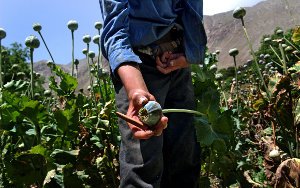 The emergence of the modern day ‘war on drugs’

The modern day conception of a 'war on drugs' emerged in the mid-70s under the stewardship of the Nixon administration. Nixon believed it to be possible to exert such strong law enforcement on the drug production that prices would go up, and that this increase in price would make the drugs inaccessible for consumers, thereby destroying the business for traffickers. This approach is grounded in a belief that limiting supply will result in reducing consumption.

This has produced a narrative over the last three decades that if drug cartels are weakened, and the laws are rigorously enforced against traffickers, the issue will be solved definitively.

In fact, what has occurred is the mutation of these groups and the appearance of new faces and new franchises for the same organisations. Take, for example, the Mexican Zetas cartel, who were originally soldiers that deserted in order to work for the Mexican drug cartels. Could we expect that this could happen again in the future with the forces that are currently attacking traffickers? The experience of Colombia in the effort to destroy the Medellin Cartel and the drug business in the country in the 1980s and 1990s seems to suggest as much.

Interestingly enough, it seems that the initial failure of the US to curb the production of illegal substances - such as alcohol in the 1930's - hadn't influenced Richard Nixon's assessments of the efficacy of attempting to restrict an “illegal” market through law enforcement.

Exacerbating poverty and environmental destruction in the 'war on drugs'

The production of cocaine and heroin is dominated by the Andes and Afghanistan, respectively. The production of these drugs does not take place in the cities, but in remote areas where the state presence is weak. Therefore the argument of using military approaches against the production of illicit substances in these regions may seem to make sense.

However, this is an inaccurate and erroneous idea. The supply chain is much more complicated. For example with cocaine - and it's raw ingredient, coca - the supply chain involves harvesting, cropping, and initial processing. This transformation from the leaf to the drug is a process, in scope and nature, entirely different to the selling and distribution of the purified drugs.

The growing and harvesting of coca and opium poppy is done by poor peasants. In Colombia, a country with a poverty index in rural areas of 64%, and Afghanistan, a country with a rural poverty index of 37%, poverty makes peasants easy targets for drug traffickers. And peasants are not the people who sell the cocaine and heroin in developed nations.

Furthermore, the method of intervention by states in the war on drugs seems to have taken inspiration from the policies used by the US in the Vietnam War, namely the use of the 'orange agent'. In Colombia, the use of the herbicide 'Roundup' has been widespread. The chemicals that are used to destroy the fields of coca or poppy have far reaching environmental repercussions, and the use of these chemicals seems reminiscent of military 'scorched earth' policies.

This type of policing has two problems. First it alienates the peasant population who face little choice but to look for the support of drug traffickers or illegal armed groups following the aggressive actions of government forces.

"The method of intervention by states in the war on drugs seems to have taken inspiration from the policies used by the US in the Vietnam War, namely the use of...'scorched earth' policies"
What is needed by the impoverished from the government are jobs, legal alternatives or policies to alleviate poverty in rural areas, not chemical attacks on their land. Second, it creates further incentives for drug production, as the supply is reduced, the price of drugs increases further, creating an incentive to plant crops to satisfy the demand and enabling traffickers to offer peasants higher payments for their crops.

This counter-productive approach to the war on drugs could be regarded as consistent with what seems to be a naivety often demonstrated by US foreign policy historically - as their actions have often inadvertently resulted in rallying support and resources for their current and future adversaries. Examples of this tactical folly are plentiful, but one notorious example is the funding of Afghan rebels (who were later to form the Taliban) in the 1980s.

Moreover, the recent findings of the US Bureau of Alcohol, Tobacco, Firearms and Explosives on the amount firearms originating from the US now used in Mexico by drug cartels seem to point to an inconsistency in their actions. Maintaining the pretence of tackling drugs at their source and presenting a show of moral superiority over these nations, whilst also proving to be the source of 60% to 70% of the weapons used by drug traffickers in Mexico, is at best a misguided approach by the US and is at worst highly hypocritical.

We must not forget the strength of the market and the illegal activities of the drug traffickers, and how these seem to explain the growth of Paramilitary Forces in Colombia, and the de-stabilization of Mexico and Central America. To some extent many illegal armed organisations around the world profit from drug trafficking (taxing the crops, as well as the finalised product, and even controlling the distribution and supply chain) as a way to finance their activities.

It is clear that most of the profit of the drug business is made in the final stages of the supply chain; when the drugs are sold in the US and Europe, the two most lucrative drug markets in the World. For example, a kilogram of non-purified cocaine costs roughly $1,000 in the Colombian jungles, whereas the equivalent amount of processed cocaine on the streets of New York is worth $100,000. Therefore, if the idea is to affect the profitability of the drug cartels, the US and Europe are better targets for attacking traffickers rather than playing a worldwide “Whac-A-Mole” in Mexico, Colombia or Afghanistan.

The use of force will keep having a limited reach, as the problem of drug trafficking exists because there is a demand for drugs - a problem that needs addressing in consumer countries. If the idea is to deal with this problem, instead of imprisoning people that consume drugs it would be better to engage with them as clinical patients that suffer from an addiction. Research suggests this approach would prove to be a cheaper and a more effective way to limit the demand for drugs.

The war on drugs has been waged at the supply, not the demand, side of the market. As a result, the market comes to the aid of armed groups and illegal factions, who are the ones who manage to profit from the situation and succeed in evading the policing of drug trafficking. Given the current ineffectiveness of the war on drugs, a more rational approach towards the problem of drug trafficking has become necessary. The way forward in this is the framing of drug consumption as a health issue, not a moral issue, and the incarceration of boss-traffickers rather than producers and alley sellers.

Latest from Colombia and Afghanistan →