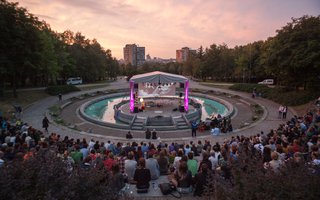 "One of KROKODIL’s key objectives was to communicate that we are all united by a single, unifying language that we can all understand and read without translation.”

Mid-June is the time of year when Belgrade is pulsating with life and exuberance, increasingly attracting foreign visitors marvelling at this still “well-kept secret”. After a decade of near-complete isolation and over a decade of patching up its tattered image, the Belgrade of today gives the impression of being a fast-changing, prosperous metropolis. Yet, behind this vibrant veneer, less visible are the layers of burdensome heritage of the wars of 1990’s, the increasingly-disputed legacy of Communism and an ambiguous relationship towards Serbia’s anti-fascistic past – which, instead of serving as a constant reminder of the resilience and omnipresence of fascism in its multiple forms – is frequently used (or abused) as an instrument of political manipulation.

Mid-June is also the time when, for the 10th year in row, the literary festival KROKODIL is taking place and – untypically for a festival of that kind – it keeps gathering thousands of lovers of the written word. In 2009, Vladimir Arsenijević, a prominent Serbian author, and Ana Pejović, a literary translator, established KROKODIL (an acronym for Literary Regional Gathering That Alleviates Boredom and Lethargy) “out of a perceived need to initiate a regional literary festival, based around the idea of abandoning any particular national literary selection.”

The wars of the 1990’s left the region deeply fragmented, not only due to newly-established geographical borders, but rather by the continuation of those wars by political means. Despite increased mobility across borders and the “normalization” of relations, literary work produced in countries and new authors that emerged after the Yugoslav wars remain largely unknown outside of their national audiences. Hence, as Arsenijević testifies, one of KROKODIL’s key objectives is to communicate “that we are all united by a single, unifying language that we can all understand and read without translation.”

The festival’s 10th anniversary was marked with a retrospective photo exhibition and a short film, entitled “Cruel Optimism – Our First 10 Years,” poignantly capturing Lauren Berlant’s philosophical premise on the inherent paradoxes of optimism in terms of the goals and ideas we are striving for in present times.

The KROKODIL Festival's founders acknowledge that the current situation in the region is eerily reminiscent of the 1990’s, with rampant historical revisionism, a mutual transfer of responsibility for the war crimes committed and the absence of reconciliatory political voices."

As Berlant perspicaciously noted, “a relation of cruel optimism exists when something you desire is actually an obstacle to your nourishing. It might involve food, or a kind of love; it might be a fantasy of the good life, or a political project. It might rest on something simpler, too, like a new habit that promises to induce in you an improved way of being. These kinds of optimistic relations are not inherently cruel. They become cruel only when the object that draws your attachment actively impedes the aim that brought you to it initially."

These words not only set the mood of the film, but left thousands of KROKODIL festival visitors – as well as its founders – pensive about an occasionally sensed futility, but also feeling strongly about the importance of such efforts. After 10 years of tirelessly pursuing one of the Festival’s key objectives – namely, to re-establish severed ties between Yugoslav peoples and promote the idea of a common linguistic heritage and sensibility – its founders acknowledge that the current situation in the region is eerily reminiscent of the 1990’s, with rampant historical revisionism, a mutual transfer of responsibility for the war crimes committed and the absence of reconciliatory political voices.

Arsenijević further remarked, “We are delighted that we still exist and that the festival has turned 10, though we did not succeed in our basic, initial intention. Perhaps, that intention was brutally over-ambitious. Like, why would you change something in your society? Yet, we thought that we could make some contribution and that there would be more other initiatives creating certain synergy, thus prompting some changes to occur.”

“History was misused before the war, and it is still misused, since all currently manufactured disagreements in the region revolve around contrasting interpretations of certain historical events. Those are the moments when our political elites conveniently stir painful memories. Hence, we historians are calling to attention against that threat.”

And some changes did occur, exactly as a result of the Festival and the idea(l)s it promoted over the years. One noteworthy example is the Declaration on Common Language, that emerged from KROKODIL’s project Languages and Nationalisms, treating a complex issue of co-existence of four political languages in the region[1] that replaced one polycentric language previously spoken in Yugoslavia (so-called, Serbo-Croatian/Croato-Serbian). The Declaration was developed by 30 linguists, and though it was met by vociferous opposition on the part of Croatian and Serbian political elites, it has been signed by over 20,000 people throughout the region.

Discussion about the common language continued during the Festival’s debating programme, in the panel entitled “Do You Speak the Common Language,” which also served as an introduction to the Festival’s two-day conference on historical revisionism, “Who Started First – Historians Against Revisionism,” organized as part of eponymous project.

In her opening words, Serbian historian Dubravka Stojanović warned that “history remains a field open for debate, where interpretation is and should be allowed, yet without omission of facts that all contribute to the complexity of given issues.” Stojanović specifically emphasized that the project was born as an act of defiance of one fraction of historians from the region, who “decided to stand in defence of history as science,” and – together with her colleagues from Bosnia-Herzegovina, Croatia, Montenegro, Serbia and Slovenia – warned that “we need to make distinction between revision and revisionism.” Revision of historical facts, as she emphasized, is “an important part of constant examination and questioning of given interpretations” that is essential in any scientific work. Revisionism, on the other hand, “is what creates and perpetuates conflicts between states, societies and peoples. Revisionism comes to existence when one fragment of historical events is presented as the whole and is used for manufacturing of politically needed narrative.”

As a general agreement, the historians concluded, “History was misused before the war, and it is still misused, since all currently manufactured disagreements in the region revolve around contrasting interpretations of certain historical events. Those are the moments when our political elites conveniently stir painful memories. Hence, we historians are calling to attention against that threat.”

Though the studious reflection on various difficult topics occasionally produced dispiriting conclusions, the ultimate message of the 10th KROKODIL Festival was that every attempt at activism – be it through the means of culture, arts and/or science – does have effect and can indeed prompt necessary changes in this post-truth world we all share.

Culture, media and advocacy Peace education Transitional justice and reconciliation
Disclaimer: The views expressed in this article are those of the author and do not represent the views or position of Peace Direct.