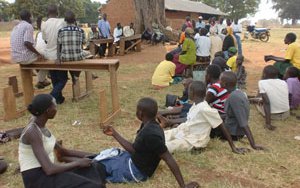 The Community Network for Social Justice (CNSJ) provides vital support and rehabilitation to vulnerable young people in Northern Uganda. CNSJ works in the region of northern Uganda that has been at the forefront of conflict between the Lord’s Resistance Army (LRA) and the Ugandan government.

The now infamous LRA have been responsible for kidnapping and forcing to fight an estimated 66,000 child soldiers- with many known to be as young as eight years old. With the cessation of fighting in 2006, and the disbanding of most LRA forces, there has been left a generation of emotionally and physically scarred young people on both sides of the conflict. This is where the work of the CNSJ begins.

Kidnapped and threatened with integration into the LRA as a young man, the issue of rehabilitation and reintegration of former child soldiers- as well as peacebuilding within the damaged communities of Northern Uganda- is an issue very close to one of CNSJ's founders, Loum Constantine.

With his own experiences providing him with a unique insight and empathy towards young people suffering within Northern Uganda, Constantine and the CNSJ have, since 1999, conducted a number of varied programmes within the Gulu, Nwoya and Amuru districts that have helped improve harmony and repair strained relationships within a community long torn apart by civil war.

Youth empowerment remains the central ethos of the CNSJ. Attempting to re-integrate and empower former child soldiers into a community still suspicious and deeply impacted by their actions is perhaps the biggest and most crucial challenge of the organisation. With few other options open to them, marginalised young people risk turning to towards crime or even returning towards insurgency. CNSJ’s work in promoting self-employment opportunities, enhancing educational opportunities, and promoting peaceful resolutions to community issues has become vital to giving young people a future away from violence.

With the support of Save the Children Austria, the CNSJ implemented the Amuru District Child Protection project aimed at improving the lives of children abducted during the conflict. The project empowers these young people to improve their livelihoods with support and training.

Mental health, still a highly taboo and ignored issue in Uganda, is also the focus for much of CNSJ’s work. With 51 reported suicides in Gulu town alone in August 2013, and much of the community - both child soldiers, their victims and abductees - having been left psychologically damaged by their experiences, CNSJ's work attempts to address and support those still suffering from the conflict. Group and individual counselling sessions, that encourage former child soldiers, abductees and victims to open up to one another regarding their experiences, are regularly conducted with the ultimate goal of healing psychological wounds and fostering mutual trust and understanding.

With the help of the Tomorrow's Peacebuilders prize money, CNSJ have ambitions to expand their project to other regions of northern Uganda, as well as expanding their current projects in Gulu, Nwoya and Amuru, in order to help improve the lives of many more who have suffered at the hands of this decades long conflict.