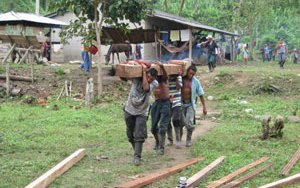 Since 1997, Comunidad de Paz (Community of Peace) has acted as a safe haven for the civilian population from the armed conflict in Colombia. Operating in the village of San Jose de Apartado, it acts as a neutral settlement and refuses to take sides in the conflict.

Colombia in recent history has experienced near constant conflict between armed guerrilla groups - the Revolutionary Armed Forces of Colombia (FARC) and the National Liberation Army (ELN) - government forces and right-wing paramilitaries. A conflict characterised by abundant human rights violations by all actors, government sources also claim an estimated 220,000 people have died between 1958 and 2013, with most of those casualties civilians.

Despite their well-publicised stance as a neutral, peaceful community, the Communidad de Paz have not been exempt from the extreme levels of violence so common during this armed conflict in Colombia. The scene of the San José de Apartadó massacre - in which five men and three children were slaughtered by government and paramilitary forces in February 2005 -, the Communidad de Paz have suffered over 2,000 human rights violations and have had more than 250 members of their community killed since 1997.

Despite these atrocities, their commitment to justice, human rights and peace in Colombia remains unshakeable and the community refuses to be drawn into the conflict. Representative of this was the courageously symbolic act of collecting the bodies of paramilitary members killed by guerrilla forces and handing them back to their families, despite the violence the community had endured at the hands of these men. The community refused to succumb to their inevitable pain and anger by seeking revenge, but rather placed the moral value of human dignity above their own grievances.

The Comunidad de Paz has been recognised for their work at both a national and international level. They have been nominated for the Akisgran prize in Germany and the Sakharov prize of the European Parliament in 2011.

With the help of the Tomorrow’s Peacebuilders prize money, Comunidad de Paz will continue to work with the young people of the community and neighbouring areas. They will use the funds to create work opportunities for young people, and turn them away from the armed conflict and drug trafficking that day after day is attracting hundreds of young people and helping to fuel the violence.

They also have plans to organise workshops, days of socialisation and events of cultural integration, where it would be possible to share their experiences with other communities. This is as well as a number of environmental initiatives they have scheduled for the near future.