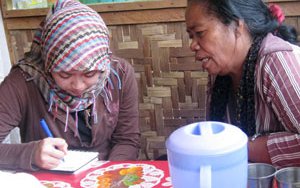 A Kapamagagopa volunteer talks with a tribal leader

Formed in 2004, Kapamagogopa (KI) is based in the Mindanao region of the southern Philippines. They work with both Muslim and non-Muslim communities for the attainment of a peaceful, self-reliant, multicultural and well developed community through advocacy and volunteering.

The Philippines is a nation that has suffered intense sectarian divisions for hundreds of years. Tensions between the largely Christian northern islands of Visayas and Luzon - that encompasses the politically, culturally and economically dominant Manila - and the poorer, marginalised southern Islands of Mindanao - home to the majority of the country’s Muslim population - have led to a near constant battle between government forces and Muslim separatist groups in recent decades.

The high profile and often bloody campaign for independence waged by Islamic extremist groups, combined with the violent tactics of repression, discrimination and exclusion used by government forces against the Muslim population, has led to major divisions and tensions between Christian and Muslim communities in the Philippines. This has only served to exacerbate conflict in the region and is what necessitates the work of KI.

Fundamentally, KI is a practical, local solution, contributing to peace and development through volunteering. Their work aims to positively change the conflict in Mindanao by increasing understanding and co-operation between Christian and Muslim groups, as well as addressing many of the root causes of conflict in the region - including conflict over land, resources and political power.

KI places Muslim volunteers into other organisations working in the fields of peacebuilding, community dialogue and inter-cultural exchange in Mindanao. Often the volunteers are the only Muslims working for these organisations. Their placement helps not only overcome stereotypes of Muslims, but also allows the host organisation to help communities non-Muslims have trouble reaching.

KI has supported 79 volunteers, who have contributed 180,000 volunteering hours, and impacted on the lives of as many as 700,000 people in Mindanao. The volunteers have contributed to establishing community water reservoirs; they have introduced a simple low-cost method of upland farming suited to small farmers with limited tools, capital and exposure to modern agriculture; they have provided capacity-building training in disaster reduction; and they have also participated in the All Women Contingent in the Civilian Protection Component of the International Monitoring Team which is assisting the peace process in Mindanao. During the August 2008 conflict, KI volunteers also delivered humanitarian relief to remote communities and contributed to peacebuilding initiatives in the Mindanao community.

With the help of the Tomorrow’s Peacebuilders prize money, KI hope that in five years they will be placing volunteers in many other parts of the Philippines, particularly regions where Muslims are few in number and prejudices and divisions between communities are greatest.