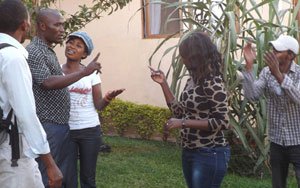 Peace Solutions International (PSI), a peacebuiulding organisation based in Kampala, Uganda, works within the refugee community on issues of peacebuilding, human rights, and democracy largely through their performing arts and film projects.

The conflict in nothern Uganda between the Lord's Resistance Army and the Ugandan government has dominated attention and resources towards the country in recent years. But Uganda, particularly northern Uganda and the capital city, Kampala, is also struggling to deal with an unprecedented influx of refugees from neighbouring South Sudan and DR Congo. This has brought with it major challenges and further conflict within Uganda's, already large, refugee community.

Each community of refugees often bring with them their own divisions, prejudices and psychological wounds from the conflicts they have fled. As different communities compete for the scarce and limited resources on offer, tensions between them have invariably flared.

PSI's work brings together refugees from different nationalities, tribes and communities to work together, and in doing so build friendships and understanding. Their Unity Group for Movie Production project recruits people from the disparate refugee communities and encourages them to collaborate in the production of films endorsing the themes of peacebuilding and human rights. Bringing these rival groups together on these productions helps to foster understanding and cross cultural relationships through the medium of acting and film production. These films have been shown both within Uganda, and in the countries in which many of the refugees originate, in order to help spread their influence further.

Underpinning PSI's work is the ethos that the people best placed to resolve conflict within the refugee community are the refugees themselves. It is this collaboration which PSI hopes to facilitate. One great endorsement are the many inter-group marriages that have occurred following participation in PSI projects, something that would very rarely occur outside of the projects.

With the support of the Tomorrow’s Peacebuilder funding, PSI hope to continue to expand their project and presence in the refugee community. Geographically PSI also have aspirations to expand their work into neibouring DR Congo, as well as to the wider Great Lakes Region in the near future.

Uganda Democratic Republic of the Congo
Disclaimer: The views expressed in this article are those of the author and do not represent the views or position of Peace Direct.

Latest from Uganda and Democratic Republic of the Congo →