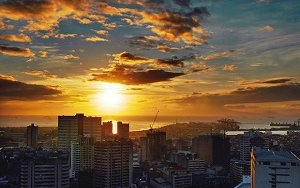 Filipino capital Manila. Filipinos are due to vote for a new President on May 9. Image credit: travel oriented.

The Role of the Church in the Peace Process

Marigza is one of the bishops in the Ecumenical Bishops’ Forum, a member of the Philippine Ecumenical Peace Platform (PEPP). PEPP’s member organisations are separately and collectively working for the just settlement of the armed conflict between the Philippine Government and the NDFP.

“We need to find a way out of the impasse”
Marigza said: “We need to find a way out of the impasse in the dialogue and peace talks between the two camps.” Currently, the NDFP rebels cry foul, as many of its officially designated peace negotiators have been arrested on trumped up charges, despite being on the list of Joint Agreement on Safety and Immunity Guarantees (JASIG) – negotiators who are accredited and allowed to move freely. Due to a lack of trust on both sides, peace talks are now regularly held up.  So Marigza says one key issue is to draw up a new list of JASIG holders: “The peace talks are held hostage by the verification process. Substantive issues are more important than procedural ones.”

Presidential candidates on the Peace Agenda

The PEPP recently organised a forum at the Malate Church with the advisers of presidential candidates, who expressed their views on the peace process. Representatives of Rodrigo Duterte, Mar Roxas, and Grace Poe were all in attendance. Bishop Marigza shared his insight on their proposals.

In the event that Duterte wins the presidency, Duterte’s representative at the forum said, Duterte will resume contacts with rebels within the first six months of his rule. He will widen the peace process in Mindanao, not only contacting the Moro Islamic Liberation Front as the current President Aquino has done, but also the Moro National Liberation Front, and the Bangsamoro Islamic Freedom Fighters: “The peace agenda for Mindanao must embrace the sentiments of people living in Mindanao and those who stand for them.”

On the broader national front, the NDFP seeks comprehensive socio-economic reforms. “The roots of insurgency are social inequity and the economic condition of the Philippines,” Marigza told me.

“A major issue is poverty. Economic issues are the breeding ground for insurgency. How can government deliver a wide-ranging social-economic transformation? Genuine land reform and national industrialisation, not land reform in its present form. Law-makers from higher social classes have to give up their interests. Socio-economic reforms must be addressed.”

Referring to the elections, the Philippine Ecumenical Peace Platform the largest ecumenical group of church leaders in the country, has declared: “Principled negotiations by both parties can help end the decades-long armed conflict in the country.

“Voting for peace means choosing candidates who show their sincerity to address the roots of the armed conflict – poverty, landlessness, inaccessibility to services and inequitable distribution of resources – especially, even during times when they are not courting our votes.”

Duterte has consistently stated that he would work for federalism in the Philippines so that all provinces will have full authority over provincial matters. But Marigza wonders if federalism as such would respond to the problems with which the provinces and the country are faced. According to the Bishop, problems will still arise.

So how can Filipinos as a nation of diverse and multi-ethnic people - but also as a state - move on from this? There needs to be a commitment to revise the Constitution. A Convention could be called to change the present legal set up.

If elected into office, Presidential candidate Mar Roxas says he will uphold previous agreements with the NDFP, unlike former President Gloria Macapagal-Arroyo, who did not observe JASIG permits, questioning the safe-conduct passes of NDFP peace consultants.

Bishop Marigza says this is a warning from the past. “Peace agreements cannot be guaranteed to proceed, if new governments renege on previous agreements.”

Bishop Marigza recommended the following actions in relation to the Philippine Government’s peace talks with the NDFP:

With elections set for Monday, they could represent a powerful way to jump-start a peace process in the Philippines. Bishop Marigza’s recommendations outline clear steps forward. The candidates should take note.
Rey Ty is Insight on Conflict's Philippines Local Peacebuilding Expert. He has wide experience in academia and practical approaches to peacebuilding, human rights, gender and social justice issues, with a focus on training peace activists. Rey has a doctorate in education with cognate in Political Science from Northern Illinois University.
Read more from Rey Ty