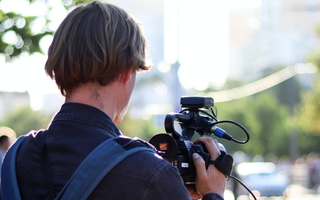 A newsflash about Ukraine describes how a smaller country is invaded by a big, hostile neighbor. Well, this was also the case with Kuwait and Iraq, and Lebanon with Syria and Israel.

Syrians especially know firsthand how violent Russian interference in one's homeland is, and the harshness of being internally displaced or a refugee. The Palestinians experienced such an exodus long ago; reacting with organized resistance labeled in their case as "terrorism".

Why use contradictory words to describe similar contexts? How do we, journalists and peacebuilders, practice objectivity while showing genuine empathy regardless of gender, race, and religion? Finally, how do we make sure that these reactions and responses are not short-lived?

Unfortunately, double standards are widely practiced by Western media. The so-called white gaze was evoked by reporters; some of whom had won awards for their work. They spoke about "relatively civilized" refugees, of "Europeans" with "blue eyes and blond hair". To say the least, this is superficial, not to mention factually incorrect, because many Afghans and Syrians have blue eyes! More importantly, these descriptions imply that refugees from Myanmar, Afghanistan, Palestine, Iraq, Sudan or Syria are somehow inferior to Ukrainians. It is not only unprofessional but xenophobic and Islamophobic. It reminded me of a "Western" camerawoman who kicked refugees in 2015; she later won a prize and was acquitted.

More importantly, these descriptions imply that refugees from Myanmar, Afghanistan, Palestine, Iraq, Sudan or Syria are somehow inferior to Ukrainians.

Such double standards in global media outlets go beyond physical features. For instance, Western media hailed the sacrifice and heroism of a Ukrainian army engineer who blew himself up on a bridge to halt the advance of Russian tanks. Had he been Palestinian, he would have been called a suicide bomber or terrorist. Worse yet, many Western journalists deliberately used a passive voice in reporting to avoid naming the perpetrators who killed their Palestinian colleague Shereen Abou Akleh. She wasn't "shot dead" and it was not an "incident". Western coverage glossed over what several videos clearly showed: Israeli snipers firing on unarmed reporters and targeting Shereen in the neck, a body part unprotected by her helmet and the press vest she was wearing. Some journalists seem to think a colleague’s worth depends on their nationality!

I recall when the renowned journalist Robert Fisk lectured at my alma mater in 2010 on the failure of Western media. In his words, the segregation wall of the West Bank, "- bigger, longer than the Berlin Wall - is referred to as a fence or security barrier in the Western press". Reflecting on his criticism, I wonder whether this is just biased reporting, or an indicator of the extent to which language is colonized!

Furthermore, the media coverage of Ukraine and the assassination of Shereen Abou Aqleh have common deficiencies: political interests jeopardize balanced reporting because they dictate the choice of words. Vocabulary matters in making peace… or not making it. Let’s not forget that it was only a few years ago that the expression "peacebuilding" was introduced in (some) dictionaries!

Environmental peacebuilder Najat Aoun Saliba, who was recently elected to the Lebanese Parliament, told me recently that she found the term "Global North and South" not descriptive but discriminatory. There are other ways to depict geopolitical and economic differences, she reasoned. Is language colonized and oriented towards conflict rather than peace? The evidence points to a lack of evolution to embrace socio-economic transformations such as gender equality, changing sexual identities, along with respect to distinct local, political and cultural backgrounds.

Is language colonized and oriented towards conflict rather than peace?

I say the language of many Western journalists is in fact colonized, favoring white refugees and dehumanizing others, which undermines the global, popular sympathy with Ukraine.

In my part of the world, the Middle East, many people feel genuine affinity with the Ukrainians except those supporting Russia, simply because they oppose "colonial" US foreign policies, be it in Iraq, Yemen or Syria, or its unconditional support to Israel. They argue that America and its Western allies preach democracy and human rights only when it aligns with their economic interests. They don't truly care about the aspirations of people genuinely seeking liberation and peaceful change. The sympathizers with Ukraine cannot dispute that claim as they look at the messes in Libya and Afghanistan. However, no matter how colonized global affairs seem to us in former colonies, faith in democracy and human rights should not be shaken.

It is up to peacebuilding and peace journalism to decolonize language by highlighting humanity's common values. In fact, peacebuilding tools such as mediation, arbitration, negotiation, conflict resolution and capacity building rely on words for impact. Sustaining peace obviously requires a narration of peace and social cohesion, as opposed to hate speech and shaming. "Peace speech" would decolonize language by writing and speaking with peace, respect and sensitivity in mind. Shereen Abou Aqleh deserved truth and "peace speech" from her Western colleagues.

However, it is an ongoing learning process. In my article on the first anniversary of the deadly Beirut blast, I interviewed a survivor whose daughter and son-in-law died while other family members were injured. Frustrated and angry with the obstruction of justice, she cursed all politicians and I quoted her directly on that. As a survivor of the explosion myself, I understood her wrath and didn't think twice about the words she used. However, my editors at Peace Insight, despite fully empathizing with the survivor, were concerned that the woman's statement might come across as hate speech too. I realized I could have conveyed what the grieving mother said differently, which I eventually did.

As the hostilities in Ukraine unfold amid growing calls in the West to arm the resistance, the country might sadly turn into yet another proxy war, a situation experienced in Lebanon, Syria, Iraq and Yemen. However, it is not too late for the media to "mind its language" and to focus on decolonized reporting, especially since more people will become refugees as this conflict continues. This is not a fate that one seeks, whether in Ukraine, Afghanistan, Palestine or Syria. The bitterness at being left behind when the world is preoccupied with another newsflash is felt no matter where you’re from.

it is not too late for the media to "mind its language" and to focus on decolonized reporting, especially since more people will become refugees as this conflict continues.

All refugees matter; and no cause is more important than another if one truly believes in democracy, human rights and peacebuilding. If not, it would be mere hypocrisy.