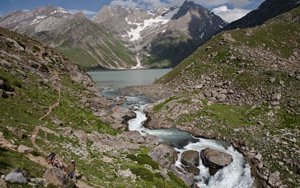 Shabir Ahmed, a 40 year old resident of Poonch whose sister lives in Muzaffarbad says that “the procedure to apply for a permit to visit the other side is very cumbersome. It takes months. It is because of the complicated process that the number of people visiting each other has not grown.” There are many who fled to the other side in the early 90’s from Sawjian, the village he belongs to on the Indian side of the Line of Control. He adds “we understand that the circumstances in which they went are related to the security of our country, but they had no other choice. We plead that their cases are looked into under the new cross border confidence building measures started by the government.”

Both cross border trade and bus services for divided families on the Poonch-Rawalkot and Uri-Muzaffarbad routes are subjected to enormous hurdles and barriers. There was recently a complete closure of all trade between both the trading points in Poonch and Uri over a single case of narcotics. On 17 January 2014, a truck from Pakistan was caught by authorities in Uri, Kashmir on the Indian side. It was found to be carrying a narcotic commonly known as brown sugar, worth an estimated $18 million. The truck was seized by Jammu and Kashmir authorities and the driver was arrested and sent to jail in Srinagar, the capital of Indian-administered Jammu and Kashmir.

Pakistani authorities promptly detained 27 Indian trucks which had crossed over to their side that day in response. They also closed the gates, which meant that 48 Pakistani trucks and drivers on the Indian side could not return either.  Their families were distressed and did not know what to do. The trucks and drivers remained stranded on each side as Pakistan insisted that the arrested driver be released or be tried in Pakistan. India maintained that since the smuggled contraband was seized by Indian authorities in Indian territory this case had to be tried under Indian law.

The stand-off continued for more than three weeks until protests by the families, media coverage and pressure from traders in Poonch (who had also suspended trade in solidarity with the traders of Uri) forced a diplomatic dialogue. The drivers and their trucks were finally allowed to cross over to their respective sides on 12 February. However, the arrested driver and his impounded truck remained in Indian territory, and trade only resumed on 26 February.

Caught up in this diplomatic standoff was not only the drivers, their families and traders but also Hanifa Begum, a mother who had filed her papers to visit her daughter in Muzaffarbad, in Azad Kashmir. “I have been waiting to meet my daughter. The entire process was delayed because of the two governments’ rigidity.” Separated from her daughter in 1992, Hanifa had last seen her in 2006, after the Poonch-Rawlakot bus service had started. However, the procedure to apply to cross the Line of Control is so challenging that she has not been able to go again.

There is a constituency that firmly opposes the idea of ‘letting their guard down’ as far as security of the region is concerned. However, there is also a great appeal for ‘borders to become irrelevant’, a goal which both sides are officially committed to. In her paper “India – Pakistan Peace Process: The Role of Intra-Kashmir Trade”, Sumona DasGupta argues that the real stakeholders of the peace are the Kashmiris on the two sides of Line of Control. “The sequence of events in the crisis and the fact that the stalemate could be overcome only when the highest echelons of the Indian and Pakistan foreign offices intervened, indicates a reluctance to allow the people of Kashmir, including members of registered chambers of commerce, to play a more proactive role in moving this CBM from its current symbolic status to a more substantive and meaningful one. Yet it is precisely the involvement of Kashmiris that is crucial in building a long-term Indo-Pakistani peace process,” she states. This sentiment is resonated by the Kashmir Chamber of Commerce.

Centre for Dialogue and Reconciliation (CDR) are an organisation which has been incessantly working with civil society on both sides of the Line of Control. They have dealt with governments and various other stakeholders such as political, economic, the media and women’s groups at the intra-regional and inter-Kashmir level, to bring Kashmiri stakeholders’ confidence-building measures and push the agenda forward. It made recommendations regarding the issue of divided families in Kashmir, Jammu and Kargil (Ladakh) to the Indian government. However, according to Sushobha Barve, Executive Secretary of CDR “since 2005, CDR has taken up the issue of confidence-building measures related to the Line of Control with the policy makers and have made effective interventions. However, at the moment we are stuck due to political reasons, preventing further liberalisation and expansion.”

A detailed account of the various dialogues, interventions and recommendations are documented in CDR’s ‘Beyond Borders: In Search of a Solution for Kashmir’. With a fledgling government now in control of India, nothing much seems to be expected in terms of forward movement and the changing of the ground zero status quo. However, for the sake of many Shabir’s and Hanifa’s, the civil society, peacebuilding organisations and the media should continue to pursue the humanising of the conflict.