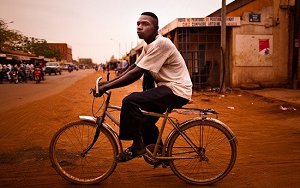 International and local/diaspora actors in the Syria response

The question is not which of the two groups is better: both have their limitations, as well as capabilities and potential. The formal system has its place just as local actors do. The question is how they can work together where doing so will enhance the humanitarian response, while also recognising that at times they will choose to operate separately.

International and local/diaspora actors in the Syria response, from the Overseas Development Institute, examines the work of local organisations in Syria, with a particular focus on the relationship between locals and internationals. The paper argues that the situation in Syria demonstrates the limits of the formal humanitarian aid system, and the need to rethink how it responds to similar crises in future.

Leveraging local knowledge for peacebuilding and statebuilding in Africa

The nature of conflict settings today, the repetition of violence, and the frequency of relapse in most conflict-affected states require new strategies and approaches from actors seeking to build peace and governance.

#PeaceTech: Everything You Need to Know, from Social Media in Afghanistan to Humanitarian Drones in Syria

#PeaceTech’s point of departure is that technology, per se, is not inherently good or bad, powerful or not; it is people’s decisions that have the power to design, use, or misuse technology—and influence where it leads us.

#PEACETECH, the latest edition of Building Peace, focuses on the potential of new technologies to contribute to peace. The publication features articles on technologies in action, as well as the policy issues they can raise.

[M]any policymakers are unaware that community-driven initiatives are already underway addressing the needs of impoverished, marginalized communities in the face of disaster and climate change.

Community-led partnerships for resilience, from the World Bank, looks at examples of grassroots women’s organizations that are strengthening resilience to disasters and climate change in their communities. The case studies demonstrate how, although often hidden, these community-driven projects have a vital role to play in building resilience.

Peace and security along the Ivorian-Liberian border: the local perspective

Peace and security along the Ivorian-Liberian border, from Conciliation Resources, shares the perspectives of local communities and government officials of violence across the border between Ivory Coast and Liberia. By providing a detailed analysis of the concerns of local people it is hoped the paper will inform peacebuilding practice in the region.

Taking the time to find a partner that has a high degree of local trust and legitimacy, and with whom you share ideas about what peace looks like and how it can be built matters.

Civil society under fire, from INTRAC, explores the issues international organisations face when choosing local civil society groups to partner with. The paper identifies three questions that internationals need to answer when looking for partners, and offers advice on how to answer them.

The art of peace: Bosnia and Herzegovina

By Balkan Diskurs: How local organisations in Bosnia are using the arts to encourage reconciliation and forgiveness. Read more »

A plea for peace: violence in Yemen must end

By Khamis Cosmas: What is the role of IGAD in South Sudan’s peace talks? Read more »

Building bridges in Bosnia: using storytelling to close the gap between theory and practice

Demystifying the wars of the future: the past and current state of water conflicts

By Adan E. Suazo: Adan Suazo argues that conflict over water is not just an issue for the future. Read more »

By Wim Zwijnenburg: While Iraq is still recovering from the environmental impact of both Gulf wars, the current conflict with Islamic State presents new environmental problems. Read more »

By Kevin McCann: Insight on Conflict is looking for volunteer researchers to help provide background information on conflict zones around the world. Read more »

Making waves in the mountains: the women’s groups fighting for a fairer future in Nepal

Speaking up: indigenous voices in the Philippines’ peace process

By Nerea Bilbatua: Nerea Bilbatua tells the story of Froilyn Mendoza, the woman chosen to represent the Teduray in the Philippines peace process. Read more »

Just getting on with it: a Burkinabé attitude to change