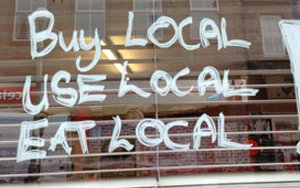 A few weeks ago, I wrote a blog piece under the title ‘what do we mean when we use the term local?’ In the piece I argued that ‘we’ (in the global north) have a very confused idea of what the local means in our own lives and so we cannot hope to coherently transfer our ideas about the local to other societies.

It was clear that a premium was attached to this word local. The term had a political and social overtone: if you support local enterprises then you support your own community’s sustainability. Yet, despite the signage, we are not terribly faithful to the local – in my town at any rate.

Peoples’ shopping habits show that they have little loyalty to the local economy. The vast majority of spending is in major supermarkets that are linked with global rather than local markets. So we might talk local, but we don’t actually live it.

The original blog posting attracted some interest in the PCDN (Peace and Collaborative Development Network) website, with a number of people noting that the term local has been contested for a long time. Others pointed out that the level of analysis (local or global and everything in between) is not as important as the quality of work (e.g., peace or development interventions).

Perhaps the most interesting comments were from INGO and NGO personnel who pondered the description given to them. Were they ‘local’ or ‘international’ or something in between? Of course, this designation will differ from individual to individual and from context to context, but it is interesting that we can ascribe such totalizing descriptions to people. Thus, for example, a national member of staff of an NGO or INGO might be called ‘a local’, while a staff member from overseas might be called ‘an international’.

It is surprising that we can reduce that most complex of species – human beings – to a single designation. And with the designation as ‘local’ or ‘international’ comes a lot of baggage.

Local staff often branded ‘suspect’ for being ‘too local’

Often ‘local staff’ (i.e., national staff working for an NGO, INGO or international organization) are seen as being close to the ground, able to speak the language, aware of indigenous practices, and having ‘local knowledge’. But they might also be regarded as ‘suspect’ by international staff; regarded as being ‘too local’ by reflecting ethnic biases, or not translating ‘properly’, or being too close to local practices that seem un-modern or even corrupt. They might also be regarded as ‘lacking capacity’ that comes from being an international staff member and thus be assigned to relatively junior positions (such as project implementation rather than project design, or menial tasks like driver).

They may be seen as being expensive, insensitive to local views, remote and engaged in a form of self-centred voyeurism. Indeed, international staff, echoing colonial administrators, have been accused of ‘going native’ or being too much at home in their posting.

Of course, the pen portraits sketched above do the categories of ‘local’ and ‘international’ a great disservice. The categories are vastly more complex than the pen portraits can hope to portray. Spend a little time with ‘local’ and ‘international’ development or peacebuilding staff and we often find that they have incredibly rich life histories that transcend easy categorization.

So we find Afghan ‘local’ staff who have spent many years in Pakistan or ‘international’ staff who have lived outside of their country of origin for so many years that they feel alien when they go ‘home’. This complexity presents many of us with a problem: we like easy categorisations, and the local/international binary is co-constitutive. By defining one, we can make sense of the other.

On pondering this, what becomes clear is that terms such as ‘local’ and ‘international’ (and modifications of these terms like ‘local-local’ or ‘insider-outsider’) can only help us so far. What seems to matter more than a designation linked to geography and origin is to what extent an actor is capable.

Local/international distinction of staff is not helpful

There is a danger that we automatically associate capability (or a lack of it) with the terms ‘local’ or ‘international’ and insufficiently scrutinize the extent to which staff actually are capable. In particular there is a danger that we associate capability with ‘international’ and a lack of capability with ‘local’. Matters are rarely as straightforward as that. There are good and bad translators, and many in between. There are good and bad drivers, logisticians, security guards and project managers. The local/international distinction does not help us differentiate between the good, bad and mediocre even though one set of actors is likely to earn considerably more than the other.

Pay differentials between local and international staff rarely consider if the post-holder has done a good job. This suggests that the notion of international = capable and local = incapable is hardwired into the management systems that govern contemporary humanitarian, development and peacebuilding work.

The automaticity of the linkage (international = capable) is interesting. It connects with a worldview that sees the global north as being enlightened and able to help those ‘less fortunate’. Similarly, the connection of ‘local’ with ‘lack of capability’ is interesting and connects with well-worn tropes of thought that might associate the local with notions of backwardness and a lack of modernity.

So at the heart of this there lie systems of thinking and sets of assumptions that guide the language we use. Or rather, perhaps it is more precise to say that they are ‘systems of unthinking’. The danger is that we use language uncritically, that it becomes part of the furniture and we fail to notice its meanings and baggage.

The peacebuilding and development worlds have developed a vernacular professional language that has had remarkable success in gaining a foothold in many conflict-affected societies. It is difficult to pass half an hour without hearing stock phrases like ‘lessons learned’, ‘capacity-building’, ‘local participation’ etc.

Obviously we need to share the same language in order to understand each other. But it is worth stopping and thinking about the meanings that we give words, and perhaps we should start with ‘local’

Roger Mac Ginty is Professor of Peace and Conflict Studies at the University of Manchester.
Read more from Roger Mac Ginty
Disclaimer: The views expressed in this article are those of the author and do not represent the views or position of Peace Direct. 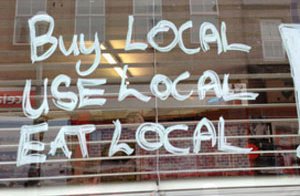