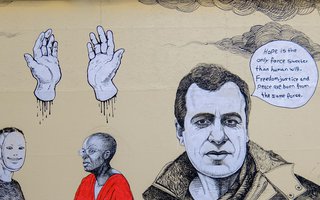 A trojan horse for peace

Art has considerable potential in peacebuilding, not only in the conflict resolution field but also in post-conflict reconciliation. Defying all linguistic boundaries, it is considered a universal language and therefore an ideal resource to understand the perspectives of others, particularly their perspective on a given conflict. Art can also directly nurture a peace process by providing a voice to marginalised or oppressed groups, whilst enhancing the relevance and legitimacy of the process itself. The use of art can be strategic, particularly during negotiations and mediation processes when verbal communication reaches its limits.

Art is a powerful instrument for collective reconciliation between communities, and it can equally be useful for individuals to overcome any trauma linked to conflict. Indeed, creating a piece of work collaboratively helps to establish a strong connection between the participants involved, and this is the philosophy adopted by the “Musicians Without Borders” initiative in Kosovo. The initiative, established in 1999, harnesses the power of music to connect people, and allows participants to process grief and loss and build bridges of reconciliation in societies divided by recent or ongoing conflict. It also aims to empower musicians as social activists and train local youths, from isolated villages in the West Bank to communities in Northern Ireland, to be change-makers in their communities - better able to express themselves. Their programmes include music activities to bring comfort and solidarity to war refugees, and to explore the cultural significance of music in Rwanda, El Salvador and Uganda.

Indeed, creating a piece of work collaboratively helps to establish a strong connection between the participants involved, and this is the philosophy adopted by the “Musicians Without Borders” initiative in Kosovo.

Art is a resource that is available for use in all stages of a conflict. Its use can be decisive in conflict prevention thanks to education and awareness-raising around peacebuilding. In India, the Seagull Foundation for the Arts, for example, has helped reduce prejudice between youth from Pakistan and India through their “Peace Works” art programme. The programme focuses on ‘learning to live with difference’, working with young people in the conflict-affected region of Kashmir. Peace Works brings Kashmiri youth to Calcutta and other towns and cities of India to see, feel, experience and understand a different world by working closely with those who are different from them, and to step away from conflict. Through theatre, art, film, photography and sports, young people are encouraged to create their own visions and plans for the end of war, to realise that peace can be a reality.

Through theatre, art, film, photography and sports, young people are encouraged to create their own visions and plans for the end of war, to realise that peace can be a reality.

A tool not to be trifled with

Art as a form of peacebuilding has shown much promise. Nevertheless, it is vital to not be under any illusions that the peaceful virtues of art also carry risks of having effects which are more harmful than helpful. It is arguably true that art provides possibilities beyond those available in traditional peacebuilding techniques, however idealising the effects or concrete results of artistic ventures would be counterproductive and only underestimate their power.

Given that art is often defined as being first and foremost an expression of the culture of each society, the major risk to its (mis)use lies in its potential to attack the very culture that it creates. It is important to keep in mind that artistic initiatives are not exempt from structures or models of potential exclusion and domination, and they are often less visible than in more traditional ventures.

If not used strategically, art as a tool risks falling into the same gaps. It is therefore essential to include art within a bottom-up dynamic, one which supports local sources of creativity and resilience, as opposed to top-down approaches. A grassroots approach must be nurtured by collaboration that is respectful and honest, and which also recognises the role and importance of local actors. Artistic initiatives which are local and community-based have the intrinsic potential to generate will and a demand for peace among the population concerned.

It is therefore essential to include art within a bottom-up dynamic, one which supports local sources of creativity and resilience.

Top-down or international programmes often attract more short-term attention and financing. However, commitment to local forms of expression and art promote a peace process and a source of resilience which is more sustainable.

In the same spirit, a top-down approach to peacebuilding also runs the risk of cultural standardisation, when the particular nuances of identity and culture in an area experiencing conflict are not taken into account. For any peacebuilding initiative, its effectiveness lies above all on the inclusion of social and cultural factors taken from the local context in which they operate. Identical projects cannot be applied to all country settings or all instances of conflict. If theatre is a strategic way to establish dialogue following a conflict, painting or photography may be a more effective device for art therapy.

For any peacebuilding initiative, its effectiveness lies above all on the inclusion of social and cultural factors taken from the local context in which they operate.

Finally, it would be naive to consider art as a medium that is solely trying to establish peace. Like any tool that can be transformed according to the objects it depicts or the user who moulds it, it can - and widely is - used for harmful purposes, seeking to provoke violence and tension rather than reduce it. Art is therefore a precious resource for peacebuilders and must be recognised as such. It would be presumptuous and dangerous however to consider it as a magic remedy to conflict and violence. It cannot work miracles alone, and in order to take advantage of it as a powerful, creative asset, it is essential to integrate it into a more global peacebuilding dynamic.

Celia Chambelland worked with Peace Direct until June 2018 to support research and project development. She will resume further studies at Sciences Po Lille where she has focused on conflict resolution and peacebuilding.
Read more from Celia Chambelland 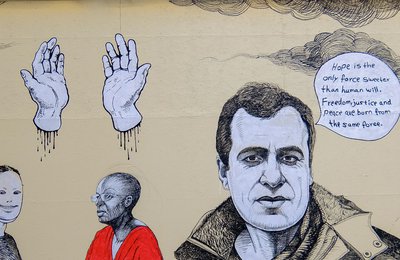