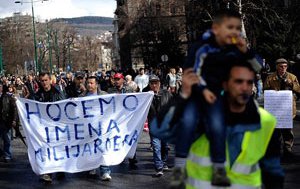 Turning the humanitarian system on its head

In many cases, especially in smaller crises, humanitarian response that is conducted and led by local people and organizations—governments in countries affected by crises, assisted and held accountable by local civil societies—is faster and often more appropriate, and thus saves more lives.

While contributing to humanitarian action in immense ways, national/state institutions and local organisations have often been kept at arm’s length by the international humanitarian community.

Localising humanitarianism, from ODI, looks at the the roles national and local actors play in the humanitarian system. The paper finds that national and local actors often have significant comparative advantages over international actors, yet are an underutilised part of the global system. The paper recommends ways to overcome the obstacles preventing greater local ownership.

Despite [the] interest and research however, engagement with religious communities still has not recognized its full potential as a key factor in development and peacebuilding. Part of this is based on a lack of understanding about how to effectively integrate this work into broader effort.

Territorial peacebuilding in Colombia: the opportunity to do what has not been achieved before?

Throughout the country, and particularly in conflict-affected regions, the territorial peacebuilding discourse has inspired local agenda-building exercises, often driven by civil society. Compared to past attempts, territorial peacebuilding will likely thrive on important opportunities, most notably the contents of a possible peace agreement, the momentum that will probably accompany its implementation and the competencies acquired during decades of civil-society-driven peacebuilding in the country’s regions.

In ongoing peace talks between the Colombian government and FARC rebels, the term "territorial peacebuilding" has emerged to describe how different parts of Colombia have suffered differently from the conflict, and therefore require different strategies to build sustainable peace. Territorial peacebuilding in Colombia, from NOREF, explores the concept in detail, asking what are the chances of success of this approach and looking at the role for civil society.

To support civil society response to emergencies, there is a need to promote more enabling conditions for civil society as a whole, nurture deep connections between CSOs and communities, and encourage international CSOs to develop stronger local partnerships.

The hidden war in Yemen

By Ahmed Hezam Al-Yemeni: With every passing day of conflict, more problems are being created for the future in Yemen, says Ahmed Al-Yemeni. Read more »

By Balkan Diskurs: Protests last year were portrayed as the beginning of a ‘Bosnian spring’. George Rossetter looks at an attempted local solution to Bosnia’s problems. Read more »

By Dario Sabaghi: How Gaza Strip refugees in Jordan are not considered citizens, leaving them in a very precarious position. Read more »

Building bridges after Ebola: how local peacebuilders are helping to prevent conflict in Sierra Leone

By Abdul Brima: Ebola has killed thousands in Sierra Leone, and its impact is being felt in other ways as well. Abdul Brima reports for Insight on Conflict. Read more »

A short history of peacebuilding in Guinea-Bissau

By Philip Havik: Philip Havik provides an overview of the causes and consequences of conflict and peace interventions in Guinea-Bissau. Read more »

Missing in Mindanao: the plight of internally displaced people in the Philippines

By Kevin McCann: Guinea-Bissau has a turbulent past – but a vibrant peacebuilding sector means hope for the future. Insight on Conflict is now covering conflict issues there. Read more »