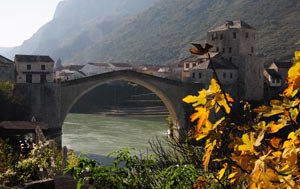 The Mostar Bridge in Bosnia has become a powerful symbol of reconciliation in the Western Balkans. Can growth in the arms trade help consolidate peace in the region? Image credit: Lazhar Neftlen.

Against the backdrop of the dissolution wars of former Yugoslavia, it seems logical to be apprehensive of the issue of weapons in South East Europe (SEE). However, the arms trade may have the potential to help secure peace in the region.

A clear distinction should be made between legal and illegal arms manufacturing and ownership. By the end of the wars, large numbers of weapons without serial numbers and other identifying features had been produced. This made it difficult for them to be traced, and hence attractive to criminals. Many firearms remain in circulation, constituting a destabilising factor for sustainable peace.

Projects to encourage citizens to relinquish illegal weapons have had some success – for example, the UNDP's ‘Choose A life Without Weapons’ campaign in Bosnia-Herzegovina – but many stay hidden. A Journeyman Pictures documentary on arms in Croatia cites the fear of a subsequent war and high black market prices among the reasons for which people keep their weapons.

The numbers game: following the money in the Western Balkans

The large number of illegal arms, and especially their retention in anticipation of further conflict, are a substantial threat to peace. The 6th Regional Approach to Stockpile Reduction workshop in 2013 stated that surplus munitions in SEE continue to threaten the region's safety and stability.

However, the legal manufacturing and trade of arms in the region could play a role in maintaining peace, because of the relationship between economic growth and peace.

The main motivation of countries in SEE to increase their arms production is not the strengthening of their armed forces, as might be imagined. Many of the weapons produced are exported, which continues a trend from before the war; Yugoslavia had a relatively sophisticated arms manufacturing programme.

According to Photius.com, exports used to amount to $500 million annually, or 7% of total exports. The production process was divided among the republics: for example, different parts of the flagship Yugoslav tank, the M-84, were made in Bosnia-Herzegovina, Serbia and Montenegro, and then assembled in Croatia.

Due to this fragmented manufacturing process, arms embargoes, and the destruction of munitions factories by NATO in Serbia, the industry was severely weakened during the wars. But since then, efforts to revive the arms industry have been successful. And this has the potential to help national economies, especially in the context of economic stagnation. All the Balkan regional economies have seen substantial increases in arms export in recent years, contributing to growth and providing much-needed employment.

The production of munitions is controversial but has led to regional cooperation
Although the production of munitions is controversial, it is also a relatively stable economic sector. States in SEE have recently signed a number of long-term contracts with several NATO members, providing a strong and stable source of income. And it has led to regional cooperation as well: in 2011, a contract to modernise Kuwaiti M-84 tanks envisioned a joint project between arms manufacturers in Serbia, Croatia, Bosnia and Herzegovina, and Montenegro. While it did not materialise in the end, this shows that there is potential for economic cooperation across SEE in the industry.

However, if the arms trade can contribute to long-lasting peace in SEE, it must be ensured that it is not threatening peace elsewhere. Blic recently reported that arms from Bosnia were sold to Al-Qaeda by Serbian and Montenegrin intermediary companies. Novilist.hr reported last year that Croatia is legally selling arms to Jordan, from where weapons have been transferred to Syria. And the New York Times suggested in 2013 that the scheme might be sponsored by the CIA.

So further efforts should be taken to ensure that arms exports are used in responsible ways. For example, alternet.org reports that he majority of weapons from a factory in Kragujevac, in Serbia, are used in UN peacekeeping missions.

A clear distinction between legal and illegal weapons suggests the potential for arms manufacturing to contribute to peace in the region. The production of arms improves these countries’ economic stability by stimulating the labour market and increasing economic output. It also has the potential for cross-border economic cooperation. With economic security one of the keys to peace and stability, the countries and people of SEE could stand to profit from the growth of arms exports.

This an edited version of an article by Jemma Hoare that originally appeared on Balkan Diskurs. A non-profit, multimedia platform dedicated to challenging stereotypes and providing viewpoints on society, culture, and politics in the Western Balkans.