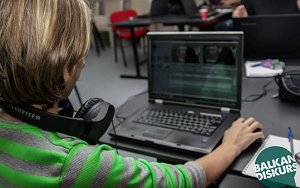 Balkan Diskurs has relaunched its innovative citizen journalistm project. Image credit: Suad Barucija.
The media in Bosnia-Herzegovina suffer from political influence and media partisanship
Young people in Bosnia-Herzegovina endure a highly polarised and politicised media on a daily basis. Recent reports highlight the prevalence of political influence, media partisanship and low levels of professionalism, while organisations such as Freedom House and Reporters Without Borders recently warned of further deterioration.

Existing approaches to media reform in the region largely focus on changing the systematic production of news rather than looking to diversify the producers of news themselves, leaving young people left on the sidelines.

In response, the Sarajevo-based Post-Conflict Research Center is running an intervention that looks to go one step further and catalyse a new participatory form of media in the region. Rather than trying to change the media landscape and the pathways through which information is provided, it aims to revitalise the role of young people of all backgrounds and to empower them to use their abilities within it.

A space free from censorship

Its Balkan Diskurs project aims to provide budding citizen journalists, activists and academics in Bosnia-Herzegovina with a space free from censorship, to publish their opinions, analyses and impressions of the region in which they live.

Its approach is simple. First, in response to low levels of media literacy in the country, its annual youth correspondent training programme provides the training that young journalists and media activists need to increase the standard, credibility and respectability of their work.

Led by experts in the fields of journalism, multimedia, photography, and film, the programme focuses on improving participants’ journalistic skills in investigative report writing, conducting interviews, identifying and verifying sources, and working in a safe, responsible and ethical manner.

Second, through its online multimedia outlet Balkan Diskurs and a host of local, regional and international media partnerships, Balkan Diskurs provides participants with multiple platforms on which their work can be published and their voices can be amplified.

A priceless opportunity for youth journalists

Balkan Diskurs trainee Lejla Bečar now serves on Index on Censorship's yourth advisory board
Lejla Bečar, a former trainee of the project, explains: “Balkan Diskurs gives my voice an opportunity to be heard, so that stories that others keep quiet about can be told; to present my town in a different, more real light. That opportunity, for me, is priceless.”

Since joining Balkan Diskurs, Lejla has published a series of articles ranging from the inspiring story of a local craftswoman and the lost story of an interethnic sports club in her local town of Visoko, to the prevalence of alcoholism in Bosnian society. The project has also served as a stepping-stone in her career – Lejla now serves on Index on Censorship’s youth advisory board and is publishing her work on a number of online sites and portals.

Launched just last year, and generously supported by the South-East European Media Observatory, Rising Voices and the Council of Europe’s European Youth Foundation, the site also aims to promote through its content the benefits of independent media as well as the value of responsible and ethical journalism that rises above the negative stereotypes so typical of the region

This week sees the start of a new era for Balkan Diskurs
To date, Balkan Diskurs has already trained 30 youth correspondents drawn from villages, towns and cities from across Bosnia-Herzegovina, and published over 100 articles, analyses, research papers and photographic essays from local and international contributors.

On the back of this success, this week sees the start of a new era for Balkan Diskurs. Today, the project is launching a new website that is better equipped to feature a greater range of work including satirical art, photographic essays and video reports. The Balkan Diskurs team will also start reviewing submissions from young people external to the site, helping to facilitate an exchange of opinions across the region and increase the flow of information from local communities to the world.

And tomorrow, the Post-Conflict Research Center is also launching an online crowdfunding campaign to help cover the core costs of the project. Funds raised will support the current group of correspondents as they research, write and publish articles throughout the year, but any donations will also lay the foundations for the project’s future as the it looks to broaden its reach across the Balkans region in 2016-17.

Velma Šarić is the Founder and Executive Director of the Post-Conflict Research Center in Sarajevo.
Read more from Velma Šarić 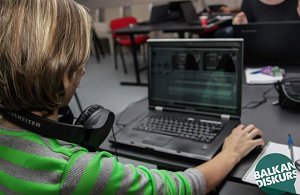