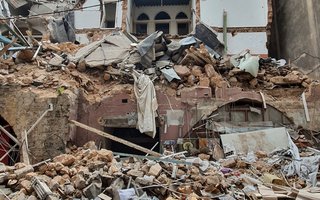 The night of the August 4th blast, I couldn't sleep though I was physically and emotionally tired. The incident was so overwhelming and heart-breaking that even taking a nap felt unsafe. I removed most of the big pieces of shattered glass and decided to resume my mission the following morning. I refused to leave my house and Beirut, although no one was sure that there wasn't a poisonous residue in the air. Staying in our damaged homes was an act of resilience.

For around 24 hours, I remained in my little cocoon at home, under the pretext that I should finish cleaning up the mess there and try to get some rest. My state of mind was swinging between two extremes: absolute anger and denial. The latter disappeared when I went for a ride in my friend's car. I could not recognise any of the neighbourhoods. Everything was destroyed. People’s spirits seemed equally destroyed. The drivers were impatient with each other and pedestrians were crossing the streets without checking the lights.

Beirut in the aftermath of the blast was nicknamed “Beirutshima” in reference to the Japanese city of Hiroshima. I disapprove of that comparison. The blast wasn't executed by a foreign army. As I see it, Beirut seems closer to Aleppo or any Syrian city that has been bombarded by its own regime. 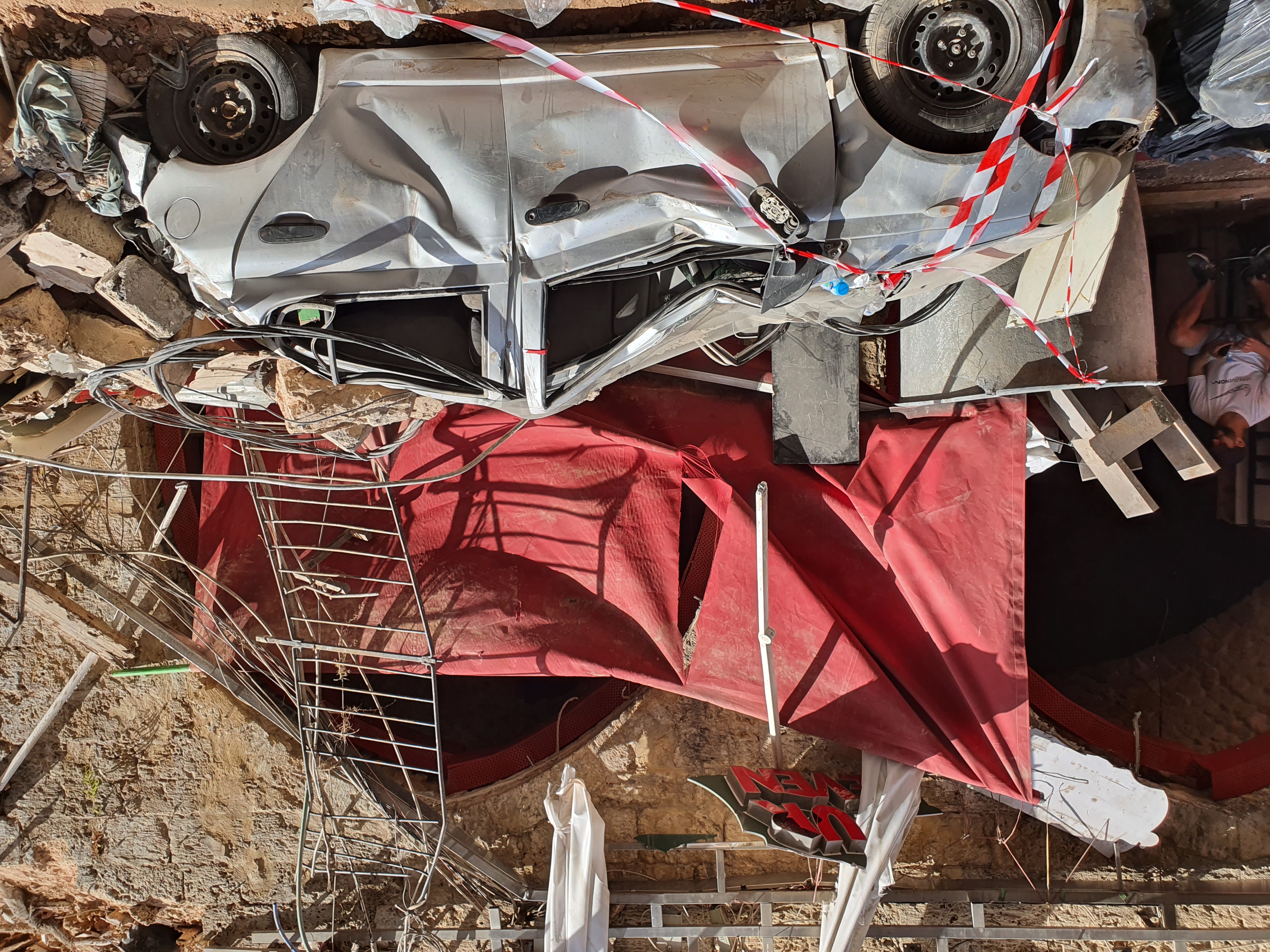 Beirut also looked like an old version of itself, that of the civil war. A few seconds caused as much ruin as 15 years of brutal fighting. I went back to the downtown area where I had had lunch the day of the explosion. The devastation was shocking. Nothing was as it used to be, nothing. The offices, the houses, the hotels, the shops, the restaurants and coffee shops were almost all gone. What broke my heart was to see all these places so severely damaged, while the “wall of shame” erected to prevent demonstrators from approaching the Parliament, remained intact. What had seemed ironic before; denying the public from accessing a public facility, now seemed symbolic. It meant that oppression would escalate and the October revolution should be resumed.

As I see it, Beirut seems closer to Aleppo or any Syrian city that has been bombarded by its own regime

The scale of destruction in the Gemmayzeh, Mar Mikhael and Karantina neighbourhoods cannot be described. Most of the traditional buildings – occupied by old tenants, families with little resources, migrant workers and refugees – lost their windows, doors, balconies, arches and roofs.

Every time I go there my heart aches. Pictures of victims, beautiful and smiling, are hanging on the walls. It could have been any of us.

The people of Beirut

Lidya was relaxing on her couch at the time of the blast (I was sitting on my couch too). She was killed on the spot. Her only child, Chantal, a brilliant surgeon, lost both her arms. Yes, you read that right, a surgeon with no arms! Two months after the blast, she is now moving to France. She has relatives there, her neighbour told me, and they will help her get proper treatment, psychological support and perhaps to receive arm transplants. Who knows if she will ever be able to practice her profession again, let alone forget the sight of her mother dying in front of her!

Lidya was relaxing on her couch at the time of the blast (I was sitting on my couch too). She was killed on the spot

Farida was a loving housewife. Her grandson Nadim works as a waiter in the vibrant Hamra area, 4 kilometres away from her house in the Mar Mikhael area. He was helping an injured costumer when he received a call from his grandfather whose voice was trembling. "He asked me to come to their rescue", Nadim told me. He added: "I didn't think twice. I ran". "You rushed there you mean?", I asked. "No, I simply ran. I don't have a car. I ran over the rubble and shattered glass". He recalled seeing corpses on the streets and injured people roaming around desperately. He didn't stop to help them and he feels guilty about it. He freaked out and feared losing precious time to save his grandparents. Mar Mikhael looked like a warzone and their building was badly affected. Farida bled to death. Nadim's grandfather is still recovering physically, while also suffering psychologically with depression, mourning the loss of his lifetime love.

Rita's injuries left scars on her arms. She spent long sleepless nights in her damaged mini market to protect it from thieves. This gentle old woman greets everyone with a smile that hides her fatigue. She told me she had nowhere else to go. When asked how she was managing day-to-day, she answered: "I am on my own, but I will survive".

Rima was heading home in the western part of Beirut, further away from the blast’s epicentre. Her car shook violently and she almost lost control of it. She witnessed pieces of a balcony smash a car in front of her. Stones and glass fell from the buildings like heavy rain, but miraculously she was not hurt. Still, she is traumatised.

A nurse spoke to me but preferred to remain anonymous. Her voice quivered more than once. I let her talk and pause at her ease without burdening her with questions. She said she could still smell blood on her no matter how much she showered. The night of the blast she was covered in blood she felt was her own.

Although she had ended her shift when the explosion took place, she immediately went back to work, only calling her parents once and putting her phone on silent. The hospital turned into an open morgue. Corpses were accumulating on the ground; some were extremely disfigured. She explained: "We couldn't keep the bodies on the stretchers… We needed them… People begged us to amputate their severely injured limbs… Their screams were piercing… We told those who were in relatively stable conditions to try to find hospitals outside Beirut…We knew every medical facility in the capital was swamped; we didn't want them to wait in vain; we had to deal with the critical cases first".

I asked about the most difficult moments of that horrible night, and she said: "A woman with severe cuts on her head and covered in blood looked familiar. It took me some time to realise she was my neighbour… An injured man turned out to be a resident doctor. I was in pain to see him in such a bad shape".

This heroic young nurse isn’t able to sleep much because of these devastating scenes, which she describes as "the worst ever in my life". She wished the hospital offered her and the staff some psychological support. As we spoke someone dropped a cup nearby and we were both startled. She and I didn't laugh about it afterwards – we couldn't.

As we spoke someone dropped a cup nearby and we were both startled. She and I didn't laugh about it afterwards – we couldn't

We all need emotional healing and collective catharsis. In the afternoon of September 10th, a huge fire broke out, and I didn't sleep, again. The déjà vu at the same "crime scene" was so heavy for everyone in Beirut. The massive trauma weighed on the city for long hours, along with thick layers of black smoke. Many left their damaged homes fearing another catastrophe. This time too I decided to stay, though I’ll admit that I was nervous. It was outrageous to see that criminal negligence could have devastated the city, again.

Non-Lebanese friends got confused when I posted my own shots of the suspicious fire. They had a hard time believing that it was happening again. It was surreal; it was implausible.

It didn't occur only once; it seems that the "new normal" in Lebanon is having suspicious fires and blasts. Everything around us is burning, and the increasingly unpopular president tells us we are going to hell if a government isn’t formed!

It didn't occur only once; it seems that the "new normal" in Lebanon is having suspicious fires and blasts

- September 15th started and ended with fires. The first was not far from the port area, at an iconic building designed by Zaha Hadid; another was at an industrial site behind the national sports facility. Two days later, white smoke was spotted at Beirut's airport. On September 19th, a massive fire erupted in the Bisri valley, a vast landscape supporting a variety of natural habitats, which risks being destroyed to make way for a controversial dam. The World Bank had recently cancelled its undisbursed funds supporting the government project.

- On September 22nd, new fires erupted at the port of Tripoli, Lebanon, the country’s second largest. That same afternoon a blast rocked one of Hezbollah's strongholds in the South of the country. The internationally sanctioned party had an arms depot in a residential area; and is believed by many to be related, in one way or another, to the Beirut blast.

- September 29th was a Tuesday, just like the 15th and 22nd, and the first explosion on August 4th. I am not being superstitious, but there was an additional fire at the Electricité du Liban Headquarters, which was badly damaged by the devastating blast. The electricity sector is chronically corrupt in Lebanon.

- The shock and devastation of the port explosion was repeated on a smaller scale on the night of October 9th, at Tariq Jdeedeh, a crowded neighbourhood in the western part of Beirut. Four people were killed and tens more injured. They too are victims of criminal negligence. It is illegal and unethical to store fuel among civilians. Unfortunately, it was followed by another blast in Achrafieh. It seems that this nightmare goes on.

More than two months after the Beirut explosion, no one is being held accountable. Amid calls for an international investigation, more than 1,200 Lebanese are filing complaints against the government.

The rotten political system is guilty of criminal negligence which caused the blast, and of widespread corruption that has precipitated Lebanon’s economic collapse. People are trapped in the abyss of despair, leading many to commit suicide or seek deadly escapes in smugglers boats.

For the sake of those who died at the explosion and at the sea, and for every one of us struggling to survive, Beirut seeks justice.

We will not forgive the murderers.

We will not forget the victims.

But we will survive this.