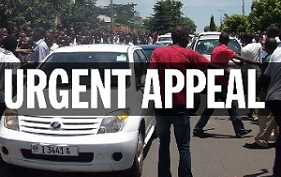 Burundi has seen weeks of protest in the capital, Bujumbura, and elsewhere. Peace Direct and its partner organisation, INAMA, are responding to events on the ground.
"On the streets, there is fear, excitement and nervousness"
Reports suggest that a military coup may have taken place in Burundi.

Local and international news sources say that army leaders have attempted to overthrow President Pierre Nkurunziza, following weeks of protest at his decision to stand for the presidency for a third consecutive term. The decision had been denounced by many as unconstitutional, including US Secretary of State John Kerry.

Burundi now faces a tense stand-off, with rumours of coup leaders racing to seize the airport while the President prepares to fly in from crisis talks in neighbouring Tanzania.

We are in contact with our Burundian partner organisation, INAMA, who have described the scene on the ground.

"When the coup was announced, the only way that news could reach many communities was via phone calls. We immediately informed our citizen reporters. There is significant danger of violent reactions to the coup, so sharing information in this way is very important," INAMA said.

INAMA is a network of 25 local peacebuilding organisations, which have trained 250 volunteers and citizen reporters around the country. They are helping us collate real-time information and create conflict briefings for local emergency services, aid agencies and the UN.

A witness said: “On the streets there are many people celebrating, but also some uncertainty. There's a mix of excitement, fear and nervousness.”

Now we need your help. Peace Direct has launched an emergency appeal to support INAMA and help stop the violence in Burundi. Click here to donate and find out more.

For a full update on the current situation from INAMA, see below. Follow Peace Direct on twitter for more developments.

[/more_info_box] For background information on the situation in Burundi, as well as details of other local organisations working to support peace and prevent violence, click here.
Kevin McCann is Peace Direct's Research and Engagement Officer. His work includes helping to run Insight on Conflict, developing new publications, and supporting Peace Direct’s conflict early warning projects. He has an MA in International Security.
Read more from Kevin McCann