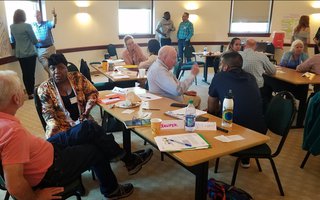 Shelby: Greetings, Logan. Thanks for joining me! Let’s start with a fraught question in today’s America: how would you describe your identity?

Logan: I love this question about how I self-identify because there are so many interpretations within that. The most obvious, seemingly generic answer, is that I identify as a cisgender, straight, White, liberal-minded young adult. However, beyond the surface of my outward appearance, I would consider myself to be a student, learner, musician, leader, advocate, son, and brother. How do you describe your identity in today's America?

Shelby: I agree, there are so many elements that make up who we are and how we experience today’s America. Being biracial, half Korean and half white, it is important to me to think about the racial privileges that I do have in this country, even as a person of color. I also identify as queer, and continue to explore my gender. I see my role in my community as an educator.

Logan: It’s great to have you on the team. Could you walk me through how the Uniting for Action: Pennsylvania program was started?

Shelby: Yes, it’s a story full of twists and turns! Our organization, Urban Rural Action, was born amidst the turmoil and aftermath of the 2016 U.S. election. Many American professionals in the international peace and conflict resolution field began looking more at their own country and recognizing the dangerous levels of fragility, division, and volatility back at home. Our friend Joe Bubman launched a program called “Super Decathlon for One America,” which hosted one-off events with the goal of connecting urban and rural communities through — you guessed it — sporting events!

Many American professionals in the international peace and conflict resolution field began looking more at their own country and recognizing the dangerous levels of fragility, division, and volatility back at home.

Logan: That’s right, and as fun as that was, he realized that simply bringing people together across geographic, political, religious, and racial divides, though a huge feat, was not enough to create the lasting change we need. People needed recurring interactions to build relationships, and to not shy away from talking about their differences or hard topics. With time, the goal of Urban Rural Action evolved from one of sport and social enjoyment, to renewing our democracy, understanding different perspectives, and working together to address shared challenges on issues such as the economy, environment, education, gun violence, media, and food. Last year, Urban Rural Action worked with community members in Philadelphia and Adams County on an initiative for criminal justice reform.

simply bringing people together across geographic, political, religious & racial divides, though a huge feat, was not enough to create the lasting change we need

Shelby: Yes, those relationships were the starting point for weaving together a team for Uniting for Action: Pennsylvania. The program goal is to build important connections, engage in constructive conversations, and take actions together across the state in the months leading up to and through the November election. Initially, we were planning on getting together in person through summits in different parts of the state. As you can imagine, we were sad to miss out on the in-person connections, homestays, shared meals, and travel experiences when we launched it in May as a completely virtual program.

The program goal is to build important connections, engage in constructive conversations, and take actions together across the state in the months leading up to and through the November election

Logan: On the bright side, working together online has made our virtual gatherings more accessible, and has given many of us a much-needed social space to meet new people in meaningful ways during a time of extreme upheaval in our country. We have a pandemic, widespread protests and counter-protests against police brutality, massive unemployment, insufficient childcare, unprecedented challenges for educational institutions, rampant misinformation, and polarized views on health, social, and economic policies – not to mention the upcoming election.

Shelby: We’ve seen a great deal of violence between communities and the state, through the interactions among police, self-organized armed groups, and protesters. We saw this after the murder of George Floyd, and more recently after the officers who killed Breonna Taylor were not charged. We are also seeing inter- and intra-communal conflict and violence between protestors and counter-protesters. Both of these are more pervasive in large urban areas like Philadelphia than in more sparsely populated areas like Adams County.

Logan: Intercommunal conflict in Pennsylvania and elsewhere presents risks of violence because of a range of conflict dynamics, such as deepening ideological divides, political polarization, and misinformation. We see these divides in the attitudes of people who live in cities towards people who live in rural areas and vice versa. An increase in negative perceptions of some communities towards others increases the risks that certain events, not least the upcoming election, could precipitate further outbreaks of violence.

Shelby: Indeed, and that is why our work is relevant now more than ever. So, where does Urban Rural Action go from here with the tremendous election-related uncertainty upon us?

Logan: As peacebuilders, we believe we must both build bridges across divides and address the injustices that fuel conflict. That means bringing together community members to engage across differences and mobilizing for non-violent action in defense of democratic principles to ensure that everyone’s voice is heard and people can protest peacefully in support of those principles. What do you think, Shelby?

As peacebuilders, we believe we must both build bridges across divides and address the injustices that fuel conflict

Shelby: I agree completely. And it also means that after the outcome is known, when a wedge will be driven into our national psyche – when roughly half our country will be celebrating and the rest mourning – we need to pick up the pieces. And that starts with those of us who are elated showing grace and humility, and those of who are heartbroken acknowledging the finality of an electoral outcome that displeases us.

Logan Grubb Logan Grubb is based in Gettysburg in Adams County, PA, and is Program Organizer at Urban Rural Action, a non-partisan initiative led by Urban Rural Action to build connections and take joint action to address community challenges across distance and difference in Pennsylvania.
Read more from Logan Grubb

Shelby Kim Shelby Kim is a Program Organizer at Urban Rural Action. She lives in Philadelphia and is involved in Uniting for Action: Pennsylvania, a non-partisan initiative led by Urban Rural Action to build connections and take joint action to address community challenges across distance and difference in Pennsylvania.
Read more from Shelby Kim
Disclaimer: The views expressed in this article are those of the author and do not represent the views or position of Peace Direct. 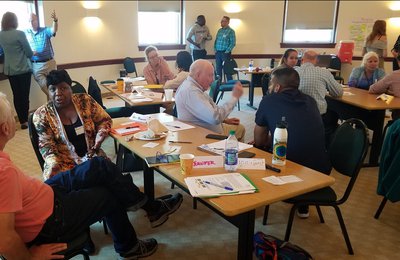