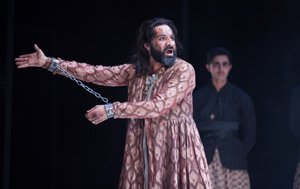 For over 30 years, the Lahore-based Ajoka Theatre company has produced theatre that aims to contribute to a just and egalitarian Pakistan. They have established their name nationally whilst collaborating with theatres and NGOs around the world. They are running a ‘Theatre for Peace’ programme with like-minded theatres and groups in India and Pakistan. And now it is London theatre-goers who have the chance to see what Ajoka can do with their play ‘Dara’ having been adapted by and now running at the National Theatre. The original play was performed in Urdu.

‘Dara’ focuses on the story of the battle for succession between two sons of Muhgal emperor Shah Jahan in the 17th century. Elder brother Dara Shikok is a Sufi and keen to draw wisdom for other religions. He offers the prospect of a tolerant empire that respects all religions.

His brother Aurangzeb instead wants to impose his Salafi-leaning version of Islam on all subjects of the empire. The scene is set for a struggle that will have implications for the empire and beyond.

Though the story of Dara and Aurangzeb might be new for many in London, the structure of a play as an epic struggle is familiar and the focus on the personalities and arguments means viewers don’t get too lost in the intricacies of the Mughal court.

The contemporary resonances are clear. As the executive producer Anwar Akhtar says, “It is a view amongst some historians and writers in South Asia that particular seeds for the later violent partition of Pakistan from India were laid during the events of Dara’s life.” Meanwhile the struggle between different visions of Islam, and how religions more broadly tolerate other viewpoints, is brilliantly brought to life, in particular during an unforgettable court scene when Dara defends himself from charges of apostasy.

Ajoka are a political theatre company (they won the Otto Rene Castillo Award for Political Theatre in 2012) and Dara is a political play. However, the politics do not overwhelm what is also an incredibly enjoyable and energetic play. The performances from the actors (in particular Zubin Varla in the title role) are superb and the staging is mesmerising. I suspect that one of the reasons that the play has such dynamism is the strength of feeling of the people behind the play. Producer Anwar cites as motivation for the play “the need to separate Islam – the religion of love and peace, the religion of Dara, and also my own family, all orthodox practising Muslims – from the corruption of religion by those who seek power, empire, wealth and territory”.

London is of course a centre for theatre from around the world, but it is particularly gratifying to have a Pakistani theatre company have the opportunity to showcase their work at the prestigious National Theatre. Lovers of theatre with an interest in the role of religion in our lives are recommended to seize this opportunity to sample Ajoka’s work before the run ends on 4 April.