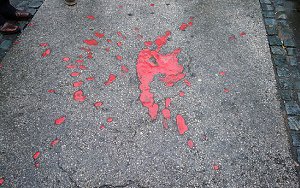 ‘Sarajevo Roses’ are spread throughout the Bosnian capital. These scars from exploded shells have been filled with resin as a memorial to the victims of the conflict. Image credit: Alex Ross Shaw.

In January, a key international conference for peacebuilders was held at the Bar-Ilan University in Israel. The focus of the conference was on how to bridge the gap between theory and practice in conflict management: to engage with new methods of conflict resolution, to find the best way to transform and manage conflicts, and ultimately to prevent the horror of war.

The next generation will always be key to resolving conflict. As such, the opening panel of the conference discussed how to personally engage students in teaching and learning about the past.

Taking part in the panel, I highlighted the role of storytelling and narrative in education. This is one way of approaching the difficulties of dealing with history. The panel also discussed the importance of stories and how they can be used as a tool in teaching peace and conflict studies. I talked about my own experience of using stories in the classroom, discussing lessons based on the culture of remembrance.

Culture and remembrance: vital to the past - and crucial for the future

Specifically, I talked about the ‘MemorInmotion’ teaching tool. This focuses on the role of remembrance in culture, which has been discussed by other peace and conflict researchers.

Sarajevo Roses are the patterns created by exploded mortar shells
The aim of ‘MemorInmotion’ is to make young people familiar with the ways that history and the memory of war and conflict are presented, used and abused in public spaces. The importance of this has been demonstrated in Rwanda, the Balkans and many other places in between.

When young people are engaged with history, they can share perspectives and create new perspectives on the past. They can critically reflect on public cultures of remembrance, which in turn increases their awareness of the role and responsibility of memorialisation. By promoting reflection on the past  - and different possible futures - it helps to establish trust between individuals and communities from different backgrounds, to restore dialogue and rebuild peaceful relationships.

Memory in peacebuilding: remembering the Bosnian war through Sarajevo Roses

Memorialisation can be a powerful tool in peace education and peacebuilding. It enables people to explore different ways to deal with difficult wartime memories, to challenge dominant historical narratives, and to question conventional concepts of identity. In my personal teaching history, I have shown groups of Bosnian students a film entitled Sarajevo Roses, and been amazed by their feedback.

Sarajevo Rose is the name given to the pattern created when a mortar shell exploded on concrete. As a memorial to those killed during the siege of Sarajevo, many of these explosion scars have been filled with red resin.

Stories can be about hope – about what should  be
Throughout the years, activists and citizens have worked to preserve these places of memory. Since 2013, the authorities have begun officially to protect the Sarajevo Roses, as many had disappeared as part of the reconstruction of Sarajevo. Today, there is a continuing debate about whether or not they should remain anonymous, and without explanation. This could lead to them being passed by, with their significance unnoticed. But their anonymity and lack of explanation allows for them to commemorate all the fallen of the war, with quiet dignity.

Getting students to talk freely and openly about their feelings about such ideas helps them to discuss not just memorialisation, but the peace and conflict processes which make memorialisation necessary.

Indeed, by evoking a greater understanding of the ‘Other’ – the opposing side in a particular conflict – storytelling can be a powerful peacebuilding tool. And stories also have another purpose: moral pressure. Stories can be about hope – about what should be – and can therefore work towards shaping processes and ideas that bring about change.

Storytellers focus on the past in order to comment upon problems, needs and desires that exist in the present. Stories are therefore fundamental to the future: they unite children and adults, the past, present and future, across cultures.

This is why stories play an important role in peace education, and empowering young people to become peacemakers themselves. If they hear stories of people from other inter-communal conflicts, they can realise how people on both sides of the conflict have suffered, and thus become motivated to work for change and peace. Stories are fundamental to history - and fundamental to peace.

Peace education
Disclaimer: The views expressed in this article are those of the author and do not represent the views or position of Peace Direct. 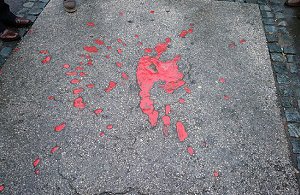