A woman and her young children in an IDP settlement, in the Puntland border town of Galkayo. How will Puntland's new border policy affect the region's most vulnerable populations? Image credit: IRIN photos

The semi-autonomous region of Puntland in northeastern Somalia has been plagued by violence since the collapse of the country’s central government. Al-Shabaab militants have targeted government officials and civilians, using every conceivable means of attack. Car bombs struck the town of Galkayo as recently as 21 August, killing and wounding dozens of civilians.

This violence has been facilitated by notoriously porous borders. Militant groups have skilfully used unmanaged borders to smuggle people, drugs, weapons and contraband.

So in response to escalating violence in Puntland, the local administration has tightened its borders with neighbouring regions. This includes a ban on trucks, commonly used by al-Shabaab to house explosive devices.

The pros and cons of tighter borders

More rigorous border control is often seen as a necessary step towards security and peace, reducing illicit movement of goods, people and arms. Research from the Center for Immigration Studies suggests national security can be threatened where control is lacking.

Yet restrictions on the movement of goods and people can also impact legitimate trade, and groups such as Open Borders advocate that economic prosperity is best attained through less control.

Local reactions to the new border policy are mixed. Businesses worry about extra transport costs. Traders fear damage to their goods. But new employment opportunities have been created
But how do the people of Puntland feel about the border restrictions? Reactions from locals are mixed. Many feel that the new policy will ruin trade with other regions in Somalia. Abdurahman Geedi, a local resident in Garowe, lamented the fact that border policy “will ruin the economy and restrict free migration of people.”

This is a position shared by many in the Puntland business community, whose trucks can no longer travel through the commercial city of Bosaso. Now goods must be loaded onto new trucks as they cross the border, incurring extra costs for businesses. Companies complain that the ban on trucks is too broad; that the connection between trucks and insecurity has not been proven by a proper security assessment.

Those transporting food and livestock are also critical of the new policy. No customs facilities have food and water for livestock, and traders are concerned about animals being kept in customs for long hours. Furthermore, the slow process of offloading and loading has meant that foodstuffs have rotted in transit.

Yet there are others who note the already positive impact of the new policy. Since the tighter restrictions have come into force, illegally laden trucks have been intercepted at the border. The policy has also brought employment opportunities for many youth in Galkayo who act as porters during the offloading and loading of goods.

Only through effective implementation of its border management policy will Puntland see stability and economic progress
With these successes in mind, I believe that the policy will promote economic stability and peace and security in Puntland; the region has a primary responsibility to protect its people and effective border control will help to achieve this. But for this to happen, the policy must be properly implemented.

Only through effective implementation of its border management policy will Puntland see stability and economic progress and begin to move through the rankings of ‘failed’, ‘weak’ and ‘strong’ used to classify states.

Osman Nur holds a Masters in peacebuilding. He currently works as a WASH coordinator with World Vision. He previously worked with COOPI as a livelihood officer in late 2011, and SOSDA, a local NGO in the field of human rights/protection, HIV/AIDS and education. He is a voluntary contributor to peacebuilding networks. You may follow him on Twitter: @OsmanNurMohame2 or reach him via e-mail: osmaan537@gmail.com
Read more from Osman Nuur 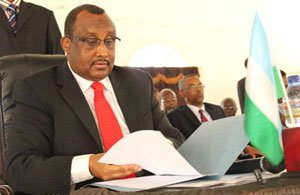