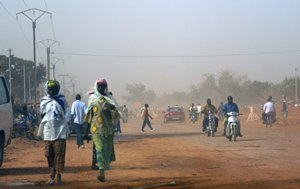 Burkina Faso's Interim President, Michel Kafando, the Prime Minister, Isaac Zida, and members of the government were taken hostage in the evening of 16 September by elements of the Elite Presidential Guard (RSP). The perpetrators have not made any obvious claims. Yesterday, a "National Council for Democracy"  announced the dissolution of the transitional political regime and the National Council for Transition (TNC), and the setting up of a consultation on the establishment of a new government.

August and September saw the publication of the final lists of candidates for the presidential and parliamentary elections. Candidates from some parties, among them Congress for Peace and Democracy, were declared invalid by the Constitutional Council. On Monday 14 September 2015, the Commission for National Reconciliation and Reform handed over its report to the Prime Minister. It proposed the dissolution of the Presidential Guard. This military elite corps was a central pillar of the previous Compaoré regime and is a source of controversy. The report also recommends that members of the unit be redeployed away from the President.

The taking hostage of the President and his government has plunged the country into an institutional crisis.  During the evening of 16 September, Chérif Sy, President of the TNC, issued a statement denouncing the takeover. He called for a general mobilisation in order to save the "Republic in danger.". Sy called for people not to acknowledge the new regime, which makes the situation even more precarious. President Cherif Sy is alleged to have declared himself interim president until president Kafando is released. If this were to be confirmed, Burkina Faso would be likely to go through scenario similar to that which took place in Ivory Coast: two presidents, two presidential palaces, two governments, and one people.

Reactions on social networks show growing discontent. Will the dissident movement welcome the military’s proposal to contribute to bring back political order in the country and restore national cohesion that will lead to inclusive and peaceful elections? The coup government might rule on empty institutions. The situation will also depend on the new authorities’ behaviour. Their legitimacy will be hardly negotiable. In a February I noted how "the RSP is lurking in the shadows in Burkina’s Transitional Government."

Civil society organisations, political parties, ECWAS, African Union, United Nations and some development partners condemned the takeover. The dissolution of the transitional political regime poses a threat to the electoral timeframe. Urged by civil society organisations, crowd protested against the actions of the RSP in the evening and late into the night. RSP elements tried to disperse the demonstrators.

International reactions, particularly ECWAS, African Union and United Nations will probably play a role in defusing the situation, through the restoration of dialogue in order to preserve what is most important: peace. May these reactions be quick! Focusing on peace means going beyond the usual questions such as “who is right?” and “who is more powerful?” and rather asks what Burkina Faso's sons and daughters want to build in the future. That is the only thing that still can gather the people of Burkina Faso.

Thank you to Marina McCann and Jean-Jacques Hible for assistance in preparing this article.