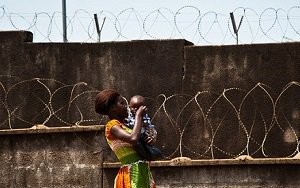 Poor funding, overwhelmed courts and overcrowding in correctional centers are obstacles to justice and peace in Sierra Leone. Image credit: Eduardo Fonseca Arraes
Frustrations in accessing justice can serve as the last straw for conflict to strike
Laws exist to protect the people they were enacted to serve. In the absence of an impartial, incorruptible, independent, and speedy judicial system that people can trust, the consolidation of peace in a post-conflict settling like Sierra Leone will be difficult. Over the years, the barrage of challenges confronting the judiciary in Sierra Leone has tainted citizen’s trust of justice delivery in the country. This mistrust was also identified by the country’s Truth and Reconciliation Commission (TRC) as one of the root causes of the eleven year-civil conflict Sierra Leone experienced.

These challenges are multi-faceted and multi-dimensional; delays in trial, alleged corruption, poor funding, overcrowding of correctional centers, to name but a few. Ordinary citizens, the media, private businesses and civil society organisations alike have repeatedly voiced their displeasure on these issues.

Recently, about thirty civil society organisations, led by the Center for Accountability and the Rule of Law (CARL), held a meeting in the eastern regional headquarters town of Kenema. The press release issued after this meeting called on the government to make major reforms in the justice system. In the opinion of these thirty organisations, for peace to thrive there is a need for more attention to be paid to the justice sector.

Moses Massa, Project Coordinator for CARL, summarised the impact of these challenges for peacebuilding in Sierra Leone: "The various problems blighting the operations of the judiciary are like time bombs waiting to explode into conflict that can be difficult for the country to control."

"In a country with high levels of illiteracy, abysmal poverty, surging unemployment rates and huge governance challenges, frustrations in accessing justice can serve as the last straw for conflict to strike."

A lack of funding has affected the judiciary's capacity to deliver quality justice
In the press release issued by the organisations, it was stated that "Sierra Leone’s budget for 2015 disproportionately allocated more financial resources to other sectors of government over the judiciary, which has invariably adversely affected its capacity to deliver quality justice services to the vast majority of Sierra Leoneans."

They reported that the "rights and liberties of Sierra Leoneans have been adversely affected and many people continue to undergo immense pain and frustration as a result of the current challenges affecting the justice system."

In one of the Southern district headquarter towns, Mattru Jong, it is reported that simple office materials such as A4 paper, computers, printers and photocopiers are lacking. The Court Registrar in the Magistrate court of Mattru Jong says the lack of these resources hinders delivery of justice in the district. This budget constraint stretches to insufficient magistrates and judges to preside over cases across the country. For example, in 2014, the judiciary was allocated a budget of 4 billion Leones compared to over 9 billion allocated to the military.

The Attorney General and Ministry of Justice acknowledge these financial constraints: "Proper professional trainings and refresher courses for our staff require huge financial investment." They said the ministry was now working to address this challenge. "We know this is a concern, and my ministry has now conducted a diagnostic survey into the problems of the justice sector. We are working on how to address this budget problem in the shortest possible time," the minister assured.

The number of cases far exceeds the resources available
Another concern raised by the thirty governance and peacebuilding organisations is overcrowding of cases in court rooms: "the courts are overwhelmed with many cases, which far exceed the resources and personnel available within the justice system to manage these cases in a timely manner."

Moses Massa from Center for Accountability and Rule of Law (CARL) thinks that the weak information system in courts adds to the delays: "Case management of files is a big problem, and it is not uncommon therefore to hear that case files have gone missing."

Massa identifies this as one of the major reasons why the country’s correctional centers are overcrowded. The lack of trust and frequent miscarriages of justice, he says, "is not good for our fragile peace and emerging democracy. People should see the courts as their last hope of having justice, but if the court fails this trust, conflict will be eminent."

AdvocAID is a paralegal organisation that advocates for the rights of women in prisons and was also part of the thirty organisations that called on government to make major reforms in the justice system. One of the many clients of AdvocAID, who spent over one year in prison without trial, said she was denied justice. "My case was just being adjourned. The magistrate was not even calling my case. I did not have a lawyer and conditions in the prisons cells were deplorable." She was incarcerated for failing to pay a debt of Le 500,000 (about $100), without trial. She disclosed that there were many people in prison for minor offences without trials. She said "such blatant denial of justice could breed hatred and thus lead to conflict."

Even in Freetown, the country’s capital, the maximum correctional center was built for 324 inmates. Sadly, this center now holds over 1352 inmates. Many of the inmates locked behind bars are awaiting trials and some have been there for years much to the violation of their rights. Some people have lost their hopes for better futures and as such are seen as threats to society when they return from prisons. The net effect of this on peacebuilding is that it breeds hatred and can lead to crimes and serious backlash. This is the reason why the country’s Human Rights Commission is now calling on government to prepare compensation packages for people who have been kept behind bars for crimes they did not commit.

Joseph Kamara is the Director of Monitoring and Research at the Human Rights Commission in Sierra Leone. "The first key pillar in a society is for justice to prevail. In a situation in which justice is denied, people can easily take the law into their own hands. Some people have developed hatred for their own countries because their rights had once been violated." With the way that the Ebola epidemic has shattered livelihoods, crippled homes and orphaned many children in Sierra Leone, the atmosphere is very ripe for the crime rate to surge. Therefore without having a responsive, effective and efficient judicial system, conflict certainly looms.

Civil society has made recommendations towards ensuring access to affordable and quality justice
The thirty civil society organisations have recommended that even though progress has been made in various ways towards ensuring access to affordable and quality justice, government should increase the judiciary’s annual budget allocation and develop a new Criminal Procedures Bill to separate civil from criminal matters. They are also saying that to decongest the courts, more lawyers and magistrates must be recruited with immediate effect. Whether these recommendations are met is something that awaits to be seen in Sierra Leone.
Abdul Brima is Peace Insight's Local Peacebuilding Expert in Sierra Leone. A radio producer and presenter on BBC Media Action Sierra Leone, he has worked with rural communities on conflict and development issues in Sierra Leone and Liberia.
Read more from Abdul Brima