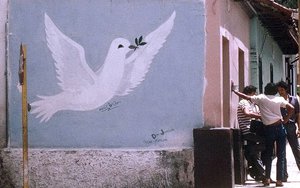 A mural from Colombia in 1985 calls for peace. 31 years later, is this now a reality? Image credit: The Real Estreya
These historic agreements are the result of advances in the current peace process
After more than five decades of fighting, recent agreements in Colombia on a ceasefire, the surrendering of weapons, guarantees against threats by armed opponents to the peace process, and the acceptance of a plebiscite to validate the agreements, indicate that the armed group FARC and the Colombian government are starting their transition towards non-violent confrontation.

These historic agreements are the result of advances in the current peace process. During the last two years, several initiatives in favour of a de-escalation of the conflict in Colombia have been undertaken by FARC and the Colombian government.

The negotiation process has produced a series of agreements on topics such as land, victims, political participation, drugs and demobilisation, disarmament and reintegration. The agreements signed in the past days should be seen as the outcome of a series of ongoing initiatives designed to consolidate trust among the negotiating parties. It is no mistake that the last ten months have been the period of time with the lowest intensity in violence during the entire conflict.

In addition, the agreements include provisions to ensure FARC combatants will lay down arms within 180 days of the signing of the final peace deal. This agreement outlines the creation of 23 areas within the Colombian territory where FARC cadres will re-group themselves start the process of demobilisation, the surrendering of weapons and reintegration into Colombian society. This process of disarmament and cease fire will be monitored by the UN, the Community of Latin American and Caribbean States (CELAC), members of the Colombian armed forces and FARC themselves.

The beginning of the end?

Peacebuilding efforts need to envision peace as something more than the disarmament of rebels
Despite the important moves towards peace, it would be premature to claim that war is over. First, the fighting in Colombia is not limited to FARC. Other guerrillas such as the ELN and EPL, paramilitary forces, drug trafficking groups and cartels are also significant contributors to this violence.

Secondly, whilst agreements have been signed they are yet to be implemented. At the moment the agreements are the promise of where the country wants to get to. It will take years of hard work to get to a true state of peace.

Thirdly, peacebuilding efforts need to envision peace as something more than the disarmament of rebels, or rebels out of uniforms. The existence of rebels and armed groups that replace the state and claim to be the sovereign in different parts of Colombia is a symptom of something greater: participation, legitimacy and the consolidation of the Colombian state.

Finally, international experience shows that violence increases after agreements are signed, by spoilers or opponents to the process. Paramilitary forces and drug traffickers are preparing their response to the agreements and the possibility of peace. Those who have made millions of dollars through violence will not allow the agreements to compromise their profits and may resort to what they know to do best: violence and fear.

The battle for peace

Now the agreements have been signed, campaigns to support and oppose the achievements will begin. This is where the real battle lies
This might explain in part why some Colombians are not welcoming of FARC members into politics. This is the outcome of a society that has suffered violence for more than five decades (not only from the FARC), with some successful peace initiatives, but also several failed attempts.

Rebuilding trust between Colombians and organisations such as FARC has proven difficult, especially given the fact that the FARC is a highly unpopular organisation in Colombia – although not for all Colombians.

In addition, the skepticism of Colombians is informed by the result of the most recent peace process with paramilitaries (between 2003 and 2006) that saw the demobilisation of one group, but ultimately led simply to the rebranding of an old actor (now paramilitaries are referred as criminal bands - BACRIM). Their presence in provinces and their terrorising of civilians remained undiminished in several parts of the country.

Government and institutions are presenting the agreements as an opportunity to rebuild the country. On the other hand, opponents to the peace process are asserting the unfairness of including armed actors in the political space, the necessity of FARC members serving prison sentences, and expressing fears of communism taking over in Colombia. This is of vital importance as these agreements and others reached in Havana will be validated by a plebiscite. For this plebiscite to be valid, at least 13 per cent of registered voters should support this initiative (4.4 million voters). The risk lies in the eventuality that an agreement is signed, but is rejected by Colombians. As the president of Colombia has mentioned, this could mean going back to war.

Now the agreements have been signed, campaigns to support and oppose the achievements will begin. This is where the real battle for peace lies. The Colombian peace process is unlikely to succeed if it is not owned and defended by Colombians. Without this support, the agreements will be a mere piece of paper, devoid of any symbolic, reconciliatory or foundational power for the future of Colombia. It is time for everyone in Colombia to try to move beyond the legacy of conflict, and to begin to work for peace.