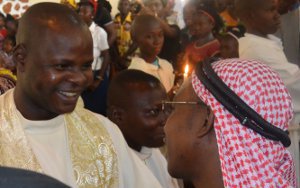 Catholic priest greeting Muslim leader after prayers. Image credit: Conciliation Resources
While international media portrays the current conflict as a conflict between Muslims and Christians, the reality is more complex than that.
I was in Lakounga, a southern suburb in Bangui, the Central African Republic, which was engulfed in five days of blind violence last month that has left at least 1,000 people killed. Communities who have lived in peaceful co-existence for generations, look at each other with mistrust and many fall victim to sectarian tit-for-tat attacks.

Despite the presence of French troops and the International Support Mission in Central Africa (MISCA) deployed on the ground, some mosques have been burnt down, shops and houses owned by Muslims are looted by angry crowds who regard them as Seleka collaborators, and non-Muslims are often targeted by Seleka militiamen who brand them as 'anti-balaka' and seek revenge. Hundreds of thousands flee their homes and become displaced.

While international media portrays the current conflict as a conflict between Muslims and Christians, the reality is more complex than that.

Seleka is a coalition of armed groups that took over power in March 2013.  They are often in conflict with, and fight, ‘anti-balaka’ (‘machete-proof’) groups, which have their origins as community self-defence groups.

Anti-balaka seem to lack a central and clear chain of command, which makes it very difficult to deal with them in the event of negotiating a solution for peace. Christian leaders have consistently been advocating for a peaceful solution to the crisis, for understanding with the Muslims and for reconciliation, just the opposite of what the anti-balaka stand for.

In Lakounga, considered the first settlement in Bangui’s history, Christian and Muslim leaders have been meeting quietly for the past few days since the crisis erupted and they have a firm resolution: “We have always lived together and don’t want violence in our streets”.

To prove their determination, on 10 December in the midst of the violence, one of the parish’s Catholic priests and the quarter’s chief confronted a group of youths who had come from the nearby “quartier Bruxelles” with the intention of attacking some shops owned by Muslims. As they talked to them, a handful of neighbours from nearby houses joined in the discussion. In the end, the youths reconsidered their plan and left Lakouanga quietly.

During the following days, as violence continued unabated in many of Bangui’s neighbourhoods, the local leaders of Lakounga including the priests and the imams, planned a series of activities in favour of peace. A local NGO put up posters on street corners showing the picture of Archbishop Dieudonné Nzapalainga talking with one of the imams. The message cannot be more explicit: “Christians and Muslims, the same blood, the same life, the same country”.

On 19 and 20 December there were troubling reports that the anti-balaka had been attacking some of Bangui’s northern neighbourhoods, targeting ordinary Muslims. Against all odds, the daring gangs tried to progress further south towards the centre of Bangui. Gunshots rang out in the proximity of a church where a meeting attended by local Christians and Muslims was being held. The media presentation was coordinated by Conciliation Resources and the Danish Refugee Council to share knowledge on how leaders in Uganda were working to rebuild trust between divided communities.

The Muslim participants were gripped by fear. The Christians tried to reassure them: “Don’t worry, you are staying with us and we are here to protect you”. Somebody made an urgent call to the French embassy informing them of the situation and asking for protection. After a tense half an hour, the guns fell silent and the workshop continued. At midday the meeting ended with the Muslim and Christian participants sharing sodas and snacks before departing.

We are one people poster. Image credit: Conciliation Resources
In Lakounga there are no internally displaced people, no one has been killed or injured and no property has ever been attacked.
“We are determined to live together in peace”, was once again the main message during the Mass of Epiphany on Sunday 5 January 2014 presided at the Parish of the Uganda Martyrs in Lakouanga by Archbishop Nzapalainga. Among the invited guests, the three imams from the quarter’s mosque were present. At the end of the service, they met with the Archbishop, the parish priest and some of the leaders of the parish council to discuss the situation along with Conciliation Resources, an international peacebuilding NGO, that is working with the religious leaders to reach out to communities by establishing a framework of dialogue and strengthening their capacity for peace work.

In Lakounga there are no internally displaced people, no one has been killed or injured and no property has ever been attacked. There exists a quiet community movement for peace between Muslims and Christians. “For us, our security is not in having weapons, but in having a good relationship and unity among the neighbours”, said one of the residents.

Women’s groups – both Muslim and Christian – met the Archbishop and Conciliation Resources at the Archbishop’s residence to identify leaders of the anti-balaka and talk to them quietly before any public meetings. They shared the examples of Lakouanga across Bangui and have begun exploring ways of extending these initiatives into the countryside. The leaders of both communities are still planning some more activities in favour of peace.

Nyeko Caesar Poblicks is Projects Manager for Conciliation Resources' East and Central Africa Programme. In the video below Nyeko Caesar Poblicks talks to Al-Jazeera English about Michel Djotodia's resignation as Interim President in Central African Republic, regional involvement in the country's politics, and what steps can be taken to bring about improved peace and security.

Conciliation Resources is an independent organisation working with people in conflict to prevent violence and build peace. They’re there for as long as they’re needed to provide advice, support and practical resources and then take what they learn to government decision-makers and others working to end conflict, to improve peacebuilding policies and practice worldwide.

Conciliation Resources has been working with local community organisations in East and Central Africa since 1997, and currently operates in the Central African Republic, Democratic Republic of Congo, Uganda and South Sudan. 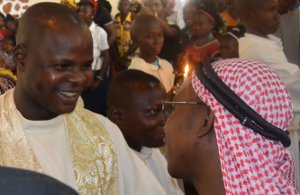