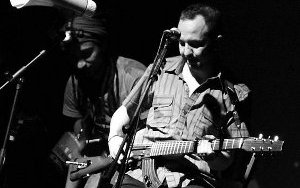 Image Source: César López facebook page
“When you live in a country like Colombia and you realise that your talent and your instruments can be used to serve your people, you don’t have any other choice left.”
Violence is often – and mistakenly - considered a quick and concrete way to solve problems. For this reason it is usually tackled with an equally quick and concrete approach: more violence. The Colombian musician César López, though, since 1994 fights violence with a much more subtle and abstract weapon: the sound of his guitar.

“It was inevitable,” says López. “When you live in a country like Colombia and you realise that your talent and your instruments can be used to serve your people, you don’t have any other choice left.”

López’s first project was the “Invisible Invincible”, an initiative to support street artists and acknowledge the social impact of their work in their communities.  In 2003 he then created the Battalion of Immediate Artistic Reaction, a team of musicians who were rapidly reacting any time there was an act of violence. The Battalion gathered where the event had taken place and played there, to comfort the families of the victims and spread anti-violence message.

It was during one of these performances that López, looking at how one soldier was carrying his weapon, got the idea of turning guns (escopetas) into guitars (guitarras) and created the ‘Escopetarra’. Both symbolically and practically, López turns the destructive force of deadly weapons into something creative and positive.

During his career Cesar has built a total of 22 Escopetarras, converting Kalashnikovs handed over by guerrilla fighters or militia soldiers who had given up the armed struggle.

“To see combatants crying in front of me and taking the decision of leaving the guerrilla forces has been one of the most touching and thrilling moments of my life,” adds López. “But I am not saying they did it because of me or because of the Escopetarra, it is just thanks to their good will.”

In August 2013 López is to receive another three rifles and to turn them into the last Escopetarras. However, this is not the end of the project. The Escopetarras will be donated to museums, artists and cultural institutions, so that their message of hope will be kept alive. López is also planning to send one of the last instruments he will produce to the arms designer Mikhail Kalashnikov.

During his career López has often had the opportunity to meet again those soldiers who had given away their rifles. Although he says that their life has certainly changed for the better, he recognises that this change is not an easy one.

“All of them have told me how difficult it is to go back to a so-called normal life,” says López. “Many don’t even know how to take decisions on their own, as they were used to follow the orders of their superiors. When they go back to their cities nobody respect them because they are not wearing their uniform and they are not carrying their weapon around. The only thing they know is how to shoot and it is difficult for them to get a job in a society that does not accept them.”

In this long and strenuous rehabilitation process, music can play a crucial role. Many fighters know how to play popular music, and some of them had built recording studios even in the middle of the forest. Once they leave the guerrilla behind, music can then become an opportunity to express their feelings, reflect on their past and speak about their present problems.

“Using art as a tool for social transformation and to prevent violence is a hypothesis yet to be verified,” says López. “We don’t know yet how to measure the results, which strategy is the most effective and whether it works better in one country rather than in another. But I strongly believe in the power of art, and for this reason I have launched a new and bigger project: 24/0.”

The initiative 24/0, whose name comes from the slogan “Twenty-four hours with zero violent deaths”, will involve around 50 organisations and thousands of artists in six Latin American countries: Colombia, Venezuela, Mexico, Honduras, Guatemala, and Porto Rico. On October 2, to celebrate the International Day of non-violence, there will be concerts, exhibitions and awareness raising events in different cities of these countries.

The musician is particularly concerned with the increasing level of urban violence. Kidnapping, assaults, robberies and violence by narco-terrorist groups are widespread in Bogotá and in the other main cities. Although international media focus their attention on the clashes between the government and the rebel groups such as FARC and ELN, the majority of violent deaths in Columbia are not directly related to the armed conflict and take place in urban areas.

With the 24/0 project, López also wants to fight indifference.

As recognition for his efforts to bring peace in Colombia and for his inspiring work, in 2006 López was appointed UN Messenger of Peace. As part of this mission, López organised the “Transformation Tour”, a series of meetings and concerts in the US and in Europe. During the tour López and other musicians hold non-violence workshops with underprivileged youth and former combatants. The concerts were also an opportunity to raise funds on behalf of local NGOs supporting programs that teach music to at-risk youth.

“These awards tend to be really abstract,” comments López. “But when I received this title I imagined myself as a messenger boy, travelling on a motorbike with a helmet and a yellow vest. This is what I do: I carry parcels containing stories and ideas, I travel with them, I share them, I collect new stories along my way and I bring them somewhere else. This is how I fulfil my role of messenger of peace.”

In the blog where López presents his album Toda Bala es Perdida (All bullets are lost), the artist writes that it is important to speak out not only against the “visible” violence, but also against the “invisible one”, such as marginalization, inequality, and discrimination based on religion, gender, sexual orientation, age or social class.

“The message of this album is that any bullet that is shot is a wasted one. A bullet symbolises every type of violence. It can be an aggression, an assault, a punch, anything that could hurt someone. A bullet can also be a scream, a word, or even the same indifference,” says López.

Two minutes of commemorative silence or an intimidating display of military power do not stop any of these bullets. The sound of a guitar might not stop them either. Undoubtedly, though, it helps break the silence that those bullets create. 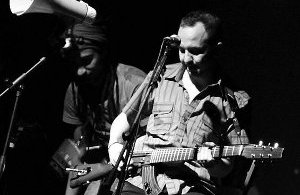