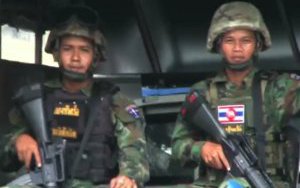 The conflict in Thailand’s southern border provinces is one of the world’s least known. Since 2004, when a decades-long insurgency reignited, the violence between Malay separatists and the government has claimed thousands of lives. The region is under emergency rule, with a heavy military presence. Locals complain of systematic human rights violations, and insurgent attacks are a daily occurrence.

Early this year signs of hope for an end to the fighting appeared. The government and the leading insurgent group, the Barisan Revolusi Nasional (BRN), announced the beginning of a peace dialogue. Although progress has been stuttered – a Ramadan ceasefire didn’t hold – this is the most positive step toward peace in years. This shift in attitude is giving civil society courage to speak out against human rights abuses and demand an end to the fighting.

Ismail Wolff, a Bangkok-based journalist and writer, has been covering human rights and politics in South East Asia for nearly a decade. His work has appeared in the New York Times, the Guardian, National Geographic, Bangkok Post, as well as CNN, BBC and Reuters, among others. He is the Thailand Correspondent for IoC.
Read more from Ismail Wolff

Thailand
Disclaimer: The views expressed in this article are those of the author and do not represent the views or position of Peace Direct.