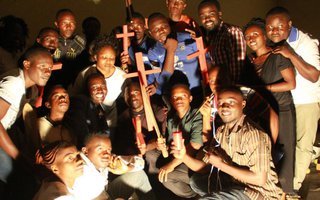 This article was originally written by Joseph Tsongo and published in French on Les Observateurs.

According to UNICEF, at least 3,200 children are now enlisted in armed groups in the DRC. But the UN mission in the country (MONUSCO) estimates that there could be as many as 4,000 in the east of the country. Thanks to disarmament, demobilization and reintegration programmes involving the Congolese authorities, the UN and NGOs, many children have been able to leave these groups.

However, Joseph Tsongo, a journalist and blogger who lives in the province of North-Kivu, where there are thought to be more than 70 armed groups, is not convinced by these programmes. In many instances, children's parents still remain afraid that they will kill them, or that they will return to the armed groups. For Joseph, "former child soldiers are often rejected by their community. Most reintegration programmes focus on the economic dimension: we help children to learn a trade, but the social aspect is not given enough emphasis in my opinion."

"former child soldiers are often rejected by their community. Most reintegration programmes focus on the economic dimension: we help children to learn a trade, but the social aspect is not given enough emphasis.”

When armed groups recruit children, they teach them to kill, they give them drugs, and girls are widely the victims of sexual abuse. As such, when young people do manage to leave a group, they often find it difficult on a personal level to reintegrate into their communities, and their mental states have very often been gravely affected by war. Some children take up leadership positions in militia groups, so they struggle being told off by their mothers, or being treated in the same way as other children.

To promote the reintegration of former child soldiers, Joseph Tsongo launched his own program in 2016 with his friend Eliezer Kasereka: the "participatory forum theater" in the Rutshuru area,  with the support of NGO APRED-RGL.

“We encourage the youngsters to act out what they have experienced.”

Over two years, almost 100 young people have participated in this project, including about twenty girls. On average, they are between 16 and 20 years old. Some had been forcibly recruited by armed groups, others joined because their entire family had been killed and they felt they had no other choice. Some spent a decade in the bush. There are also young people involved who have never fought. When we have a new group of participants, we always ask young people to tell their stories so that they can express their emotions and experiences. During the next workshops, we invite them to act out what they spoke about previously.

“We encourage the youngsters to act out what they have experienced.”

Joseph organises shows every two months, often in churches. They are usually in the Kiswahili language and always are split into two parts. In the first part, it is the young people who play, reproducing what they lived in the bush.

"If a young man is gagged on stage, it means he will not say anything and just obey if he is ordered to kill."

For example, in the video above, young people are surprised by a woman farming (0'28). This shows what happens when a rape is committed. We also see a youth who touches a cross on a coffin (2'10), symbolising violence, death and suffering. Then he cries saying that his sister was killed with a machete (4'00). Generally, we stop the scene at that moment: the actors then remain frozen.

Then in a second part of the workshop, the spectators intervene. We ask them if they have experienced what has been acted out by the actors, so that they can discuss it (3'07). Then we ask them to change what they want in the actors - who still remain frozen - so that there is less violence visible on stage. Usually they make changes such as removing the machete that the actor is holding, to create a more peaceful scene.

The spectators are often moved. They understand that young people generally do not want to fight and that they were victims of the war, like them. A woman once told me: "I thought they were barbarians, but I understood that they had been influenced or exploited."

Then we ask them to change what they want to in the actors - who still remain frozen - so that there is less violence visible on stage. Usually they make changes such as removing the machete that the actor is holding, to create a more peaceful scene.

As for young people, they say that the theater helps them to change, to realise that there is a life outside the bush. It brings them closer to their families, and they feel more loved and integrated into their community.

Joseph Tsongo is a freelance writer and blogger, based in the DRC and writing about conflict resolution and peacebuilding. He is also a photo journalist for InfoCongo.
Read more from Joseph Tsongo

Disarmament, demobilisation and reintegration (DDR) Children and youth
Disclaimer: The views expressed in this article are those of the author and do not represent the views or position of Peace Direct.

More on Disarmament, demobilisation and reintegration (DDR) and Children and youth → 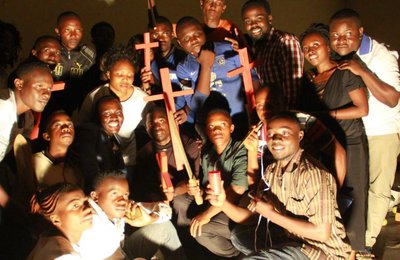