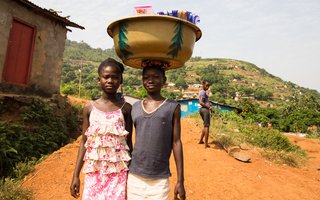 UNMEER/Martine Perret https://www.flickr.com/photos/unmeer/16060548159/
The 2018 elections in Sierra Leone promise to be tightly contested. In this tense environment, civil society organisations have been running important advocacy campaigns for young people about the power of their vote

The political atmosphere is heating up in Sierra Leone as the two leading parties, the ruling All People’s Congress (APC) and the main opposition Sierra Leone Peoples’ Party (SLPP), present their presidential hopefuls for the 2018 elections. Observers and political pundits anticipate a tightly contested battle for the presidency in next year’s elections given the formation of another viable political party with former United Nations Diplomat, Dr. Kandeh Kolleh Yumkella, viewed as its potential flagbearer.

As the political drama unfolds, civil society organisations (CSOs) have been busy traversing the length and breadth of the country, running advocacy campaign to educate young people about the power of their vote.

A leading consortium, Standing Together for Democracy, comprised of civil society organisations (CSOs), carried out a nationwide survey with hundreds of youth actively involved in the outcome of a Citizens’ Manifesto tagged: “My Vote, My Life”.

The manifesto pushes for political reforms that lead to inclusivity and accountability in political parties’ activities ahead of the 2018 elections, and aims to change the “face and purpose of politics in Sierra Leone” for the better.

For a country that is ranked at the bottom of the human development index, the document notes, it is easy for everything to become a priority. This “Citizens’ Manifesto” is useful because it gives direction to aid development and reduces prospects for conflict at a time when political parties are preparing their campaigns.

Even after the civil war and the destruction caused by Ebola, violent clashes have persisted between party supporters in all parts of the country

Development and political analysts think the scope for meaningful development in a country that has experienced eleven years of brutal civil conflict will be greater if Sierra Leone can pivot its current political culture away from tribal and regional division.

Even after the civil war and the catastrophic destruction caused by the Ebola virus, violent clashes have persisted between party supporters in all parts of the country. The Standing Together for Democracy consortium believes violence and political division increases spending on security agencies and diverts funds away from addressing poverty.

The consortium says fears about political violence in 2018 are well founded as political parties have in the past mobilised votes on identity and used ethnicity to manipulate voters. The hope for the implementation of the Citizens’ Manifesto is that it will be crucial in curtailing these problems and helping voters understand the value of their votes. Let us now take a nosedive at two priority areas in the manifesto.

2016 World Peace Index ranked Sierra Leone the second most peaceful country in West Africa. But, is this really so? Should peace only be viewed as the absence of war or gunfire?

Gender inequalities in political participation remain an important part of “democracy’s unresolved dilemma” of unequal participation. This is not a problem unique to Sierra Leone, although a few African countries like Malawi, Kenya, Liberia, have demonstrated commitment to providing space for women to occupy political leadership.

There is still a lot more to be done to increase women’s participation in politics. Beneath the rising sense of ethnic division, the 2016 World Peace Index ranked Sierra Leone the second most peaceful country in West Africa. But, is this really so? Should peace only be viewed as the absence of war or gunfire?

In a country where economic disparities between the rich and poor are ever rising, unemployment is the fate of university graduates and putting food on the table for mothers is an uphill struggle, it is important to practice a political culture characterised by wider participation, national development, non-violence, and women’s role is cardinal to achieving this.

This is why it requires that presidential candidates and political parties commit to giving 40 percent local council and parliamentary nominations to women. It says, “we believe that increased women’s representation in governance will help change the face of politics and improve the quality of representation in parliament and communities”.

Women make up over fifty percent of Sierra Leone’s population, but currently, occupy only eleven percent of the country’s parliamentary seats. This must change if peace is to last.

Young people have been consistently used by politicians. It is time to change that narrative by giving young people the chance to assume leadership positions

“Young people should now think of voting on issues and not on tribal or regional basis or because politicians supply them drugs to wreak havoc and promise them better lives,” says Andrew Lavalie, Executive Director of Institute for Governance Reform, one of the leading civil society organizations behind the Citizens’ Manifesto.

He observed that young people have been consistently used by politicians and that it is time to change that narrative by giving young people the chance to assume leadership positions.

It is against this backdrop that the Citizens’ Manifesto is calling political parties and presidential candidates to give young people greater political access and participation. The manifesto demands at least 15% allocation of local council and parliamentary nominations to people under thirty-five. It says: “a large number of university graduates go jobless for years while many youths are mobilized for political violence.” This view is widely held by other Sierra Leoneans especially traders who sell cheap alcohol that politicians usually use as bait to lure young people into political rallies.

Amadu Kallon, a trader at Abacha Street, one of the busiest commercial business centres in Freetown, said: “Youths are being used by politicians. In the run-up to the primaries and constituency elections, I sold bundles of alcoholic contents worth millions of Leones to youth leaders for consumption at rallies organised by political aspirants. The Citizens’ Manifesto is, therefore, challenging politicians to take concrete actions that will “reclaim youths from violence and include them in leadership.”

In Sierra Leone where youth are vulnerable to manipulation and can be enticed into perpetrating violence during election campaigns, rising unemployment, lack of education and abject poverty exacerbates the problem. The stakes for conflicts, planned and pre-financed by ill-motivated politicians, are high as the country prepares for the decisive 2018 elections.

Political leaders made the commitment during the launch of the manifesto to work in line with the document, as well as agreeing they should adopt parts in their manifestos come March 2018.

Former Chairman and Leader of the SLPP, Chief Sumanoh Kapen, stated that the Manifesto targeted three key areas including social contract, social conscience and social engineering. He emphasised that the future and hope of Sierra Leone is in the youth and that the manifesto could not have come at a better time. Andrew Lavali of IGR noted that; “this document is the voice and aspirations of the ordinary Sierra Leonean, and the recommendations should be taken seriously because they have a role to play in advancing the country’s democracy.”

It is clear that one of the ongoing drivers of hate and violence is the reluctance of the political class to embrace the many opportunities for a sustainable solution to violence and political extremism. Impunity, inequality, and skewed resource distribution remain the biggest drivers of politics in Sierra Leone, reminiscent of the pre-war situation described in the Truth and Reconciliation Commission Report.

The Citizens’ Manifesto attempts to address these institutional challenges within the country’s political setup by presenting an opportunity for political parties to embrace reforms. The manifesto pushes for reforms that “disarm the tools for violent mobilisation as we count down to 2018.”

As the elections loom, ordinary people remain eager to see whether the Citizens’ Manifesto will be adopted and its recommendations taken seriously.

Development Women, Peace and Security Transitional justice and reconciliation Children and youth Atrocity prevention Governance
Disclaimer: The views expressed in this article are those of the author and do not represent the views or position of Peace Direct.