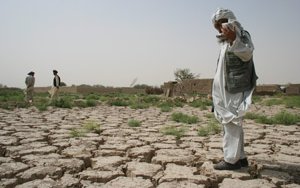 Whether economic, political, social or environmental in nature, conflicts in general are caused by discrepancies in the way resources are being distributed in society. If mechanisms for an adequate distribution of resources is not yet in existence, violence may be seen as being the only channel through which disenfranchised individuals and groups may sway resource redistribution in their favour. The role of peacemakers in this respect is to convince warring groups that, by negotiating a new distribution of resources with the opposing side, they would be benefiting more than if they were to wage war. The adequate existence of resources, in this respect, permits its redistribution.

Climate change alters this dynamic significantly, as it has a negative effect on the supply of natural resources at a juncture where population growth and its subsequent consumer needs are increasing their demand.

In a conflict situation, resource scarcity may push warring groups to try and maximize their gains through war, dissuading them from negotiating peacefully for a shared, albeit smaller, apportionment of a shrinking resource. Climate-based resource scarcity therefore threatens the ability of peacemakers to convince warring groups that peaceful negotiations are favourable.

General understanding has been reached that climate change has altered, and will continue to alter, current paradigms of human sustenance. Questions however arise as to what actions need to be initiated in view of the negative effects of current climatic trends. Climate change adaptation scholars such as Javeline argue that frameworks for adaptation must be created to reduce our systemic vulnerabilities “through the protection of coasts, cities, water supplies, public health, ecosystems, and infrastructures”.

Similar views are expressed by the Intergovernmental Panel on Climate Change, which defines the idea of adaptation as an “adjustment in ecological, social, or economic systems in response to actual or expected climatic stimuli and their effects or impact”. While these measures may help societies cope with climate change, they do not facilitate an improvement in the availability of natural resources, an issue that proves to be problematic in a conflict situation.

The issue at stake in a peace process, as mentioned above, is a reconceptualization of resource distribution schemes . This however may not be attainable if the resource being disputed does not exist in adequate volumes. To set adaptation goals is necessary, but is not enough. Mechanisms to modify the provision of natural resources, and their inherent ability to generate goods and services, needs to be put forth in conjunction with climate change adaptation solutions. An example of one such mechanism is ecological restoration.

To adopt ecological restoration mechanisms as part of a peace agenda would not come without its own set of challenges. Within ecological studies circles, doubts still loom over the effectiveness of restoration projects, which some say are currently too regionally concentrated in North America and Australia. This regional bias in research may call into question their application and replicability in other parts (and contexts) of the world.

Furthermore, ecological restoration projects do not yield immediate results, requiring prolonged periods of time to reignite the state of their targeted ecosystems. Nevertheless, successful results have already been documented that suggest the efficiency and feasibility of restoration projects.

By modifying the natural resource supply and demand paradigm in conflict situations, opportunities may arise for individuals and groups-at-war to increase the space with which they are able to bargain. In addition to this, third parties acting as peace brokers may also be better equipped to facilitate a peace process in view of an adequate availability of resources.

To take these statements as undeniable truths is still a premature effort. This article does however highlight one important point: more research needs to be conducted on the intersections between climate change, ecology and conflict resolution practices, for solutions to conventional problems may arise as a result of such an exploration.