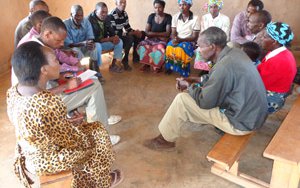 After the genocide and war that destroyed the social fabric among Rwandans, different approaches have been used to restore hope, heal the wounds of the past and build social cohesion. “Community based sociotherapy” is one of the approaches introduced by the Byumba Anglican Diocese operating in the Northern Province of Rwanda. This article explains the approach and presents its contribution to and effectiveness in building a restorative society.

Sociotherapy is simply understood by Nvunabandi and Ruhorahoza (2008:65), two of the facilitators of the sociotherapy program, as a way to help people come together to overcome or cure their problems. The approach helps people in a group format, whereby group members are given an opportunity to help their companions to overcome problems, as well as solve their own. Community based sociotherapy was first introduced in Rwanda in 2005. The program has been remarkably successful in assisting Rwandans in dealing with the consequences of genocide and war.

The group is used as a therapeutic medium to establish trust and confidence in one another, and open environments for discussion and peer-support structures. The approach has helped bring many people to recognize their mistakes and ask for forgiveness during the time of Gacaca courts in Rwanda and to build up reconciliation and unity in the community. Applying the approach, the Byumba Anglican Diocese has tirelessly contributed to assisting wounded people in dealing with the psychosocial problems unresolved by the Gacaca courts.

The effectiveness of the sociotherapy in Byumba relies on the following principles which are considered as the backbone of the approach:  Interest in people, Equality, Democracy, Here and Now, Responsibility, Participation, and Learning by Doing. In addition, sociotherapy is defined by its practitioners using six conditions or phases (Richters, 2008:36):

Many testimonies relating the healing impact among the beneficiaries have emerged. Participants have been able to alleviate trauma by finding a space for sharing their hurting memories and wounded emotions. Raped women have been given the opportunity to talk about what has happened to them with individuals who care. Through this approach, affected Rwandans have been able to move forward and give pardon to their abusers. They have learned to trust others and, as a result, realize that their lives can continue with meaning.  The program leaders are making efforts to expand this approach to the entire territory of Rwanda. Currently they are working in the four Provinces of the country in a consortium with two other organizations.  They hope to expand this program throughout the complete Districts of the country.

This sociotherapy approach is a practical example of a restorative process with the aim of building a healed and reconciled Rwandan society. The created groups are becoming restorative circles, and are growing in the ability to heal. Looking at the principles of restorative justice as per Howard Zehr and Harry Mika ( Zehr, 2002:64-69), the sociotherapy approach here described can be qualified as a working and effective restorative practice because:  (i) the victims of the genocide and war, as well as the whole community, have been harmed and are in need of support; (ii) the victims, offenders (genocide perpetrators) and the community are the key stakeholders in this restorative initiative; and (iii) in many cases, the offenders recognise and acknowledge the wrong they committed and, as the result of the sociotherapeutic group works, understand their obligation to make things right as much as possible, commit to playing an active role in a reconciliation process, and work for the welfare of the whole community.

The approach seeks to heal people in their communities and put right the wrongs, as well as restore broken relationships (both intra-personal and interpersonal). The success and effectiveness of this method can be partially attributed to the fact that group relationships and community life are so integral to the Rwandan people.

Thank you to Jody Ellyne for her help in preparing this article for publication.