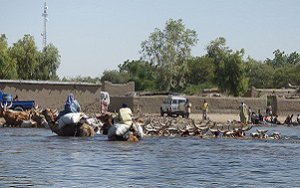 Ngouboua, on the shores of Lake Chad. Communities in the region have had to cope with an influx of refugees from Nigeria. Image credit: UN.

One of the major challenges in the Lac region of Chad concerns how best to ensure peaceful cohabitation between several neighbouring communities. There are four key groups of people:

At the root of difficulties is a big decline in economic activity
At the root of their difficulties in living together is the big hit in economic activity which the region has suffered. Trade with Nigeria has become extremely difficult. Nomads and herders can no longer go to Nigeria with their cattle, and traders can’t import goods from across the border. Fishing on Lake Chad has been banned for security reasons. As such, local populations – whose three principal activities are raising livestock, trading, and fishing – have been left with few ways to pursue their livelihoods.

It is in this context that local inhabitants have seen waves of new arrivals. Unfortunately, their daily struggles have made relations difficult. Local people have complained that the new communities have caused problems, and will create shortages.

In particular, they claim three things:

Although this is a broad analysis, it is instructive to reflect on the internal dynamics which lead to such conflicts. When poverty, inactivity, economic need and a lack of trust come together, small but key events can poison communities and worsen latent tensions. This means it is key to reflect on these actions and the ways in which these latent situations can be anticipated.
Working with community leaders would help developed a shared recognition of the mutual need for peace
NGOs, local associations and organisations need to reflect on what work can be done to develop this fragile cohabitation. The public authorities are generally more inclined to response work than prevention, which is why action in anticipation would be useful. The first step is to identify the type of work and the relevant people who could undertake it. Based on the situations described and on the importance of tradition and religion, some of the principal community leaders who could be involved include imams and religious teachers, traditional authorities including heads of villages, cantons and ferricks (nomadic camps), and representatives of youth and other organisations.

Working with these leaders would help develop a shared recognition of the mutual need for peace, and could include training and awareness-raising activities as well as the development of a peaceful conflict resolution committee, bringing together members from each community.

This is not an exhaustive list. Once these actors have been identified and activities have been started, it would be beneficial to raise awareness of these issues among all the different populations involved, through or with their respective leaders. It would also be helpful to use this work to identify other people and activities who might become involved. 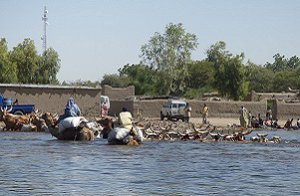