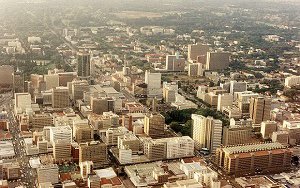 Observers of Zimbabwe have noted three main factors that could lead to violent conflict breaking out in the future. The first of these is the country's and ruling party's constitution, which some see as unclear on key issues. The second is on political succession, and the third on the recent split in the ruling party, coupled with an ever-increasing number of opposition parties.

The situation in Zimbabwe

The relatively peaceful period Zimbabwe has enjoyed belies the reality of life for many
For a country ranked 125 out of 162 on the Global Peace Index, it may be surprising to some that Zimbabwe has not suffered from violent conflict in recent years. But recent events, coupled with simmering political tensions in the run-up to the 2018 national elections, are cause for concern. Addressing these issues now could be vital in preventing violence in the future.

The relatively peaceful period Zimbabwe has enjoyed belies the reality of life for many of its citizens. Millions of ordinary Zimbabweans are unemployed or do not have access to basic resources like food, health, electricity and transport. Currently, there is a critical shortage of clean water in Harare, sewers are not efficient, rubbish is strewn all over densely populated areas and people jostle for position to sell anything that can bring them a little money for the day.

The depressed socio-economic and political environment has seen calls for public marches and demonstrations from opposition political parties and some sections of civil society, but these have largely been ignored by the bulk of the population.

Similarly, pre-independence tribal tensions between the Shona and Ndebele, aggravated by the Gukurahundi killings in 1983, have not been resolved. Attempts have been made at the highest political level to address the animosity that exists between tribes, but with little or no consideration given to grassroots projects focused on reconciling differences and promoting cooperation and dialogue. The highly centralised government and one-party system - constituted since independence in 1980 - has been accused of marginalising minority ethnic groups in Zimbabwe. Calls to devolve power to rural areas and increase political participation for marginalised tribes have been resisted, and voting is therefore predominately along tribal lines.

The run-up to the 2018 national elections

There is rising tension among the political elite in Zimbabwe
There is rising tension among the political elite in Zimbabwe, which it is feared will increase as the national elections draw nearer. President Mugabe - in power since independence in 1980 - has confirmed his intention to stand as a candidate for the ruling Zanu PF party, however, dissent and rifts in the party ranks threaten to disrupt what Mugabe would have hoped to be a routine run-up to polling day. The expulsion of the Vice President, Joice Mujuru, along with 140 of her supporters, in December 2014 caused a huge split in Zanu PF. Those expelled, mostly long-serving liberation war comrades, cabinet ministers and senior party officials, lost no time in forming their own political party. This puts the erstwhile Zanu PF comrades at loggerheads and could lead to a potential showdown in the coming 2018 elections.

Over the years there have been election-related complaints from political parties and private individuals but these have been ignored. Many crimes have also been committed during election times. Cases of abduction, unlawful arrests, murder, rape, arson, and disappearances have been reported but without state investigation or legal redress. Victims have largely remained uncompensated.

Furthermore, the events of the 2008 presidential election still linger in the collective conscious of the electorate. Results provisionally confirming that Mugabe had lost to rival and MDC party leader Morgan Tsvangirai were followed by a campaign of violence and a string of arrests of high profile opposition politicians and foreign journalists. The overturned election result which restored Mugabe as President was widely denounced by foreign governments and institutions amid claims of intimidation, violence, and electoral fraud. It is feared that the fracturing of Zimbabwe’s political elite coupled with the electorate’s propensity for voting along ethnic lines and alleged history of electoral malpractice and conflict, that violence is likely to erupt.

What violence would mean to the region and world

Violent conflict in Zimbabwe would affect not just Zimbabweans, but its neighbours and the entire region. In Zimbabwe itself, it would mean an absence of a functioning government, compromising the police’s ability to protect citizens and property. The running of schools, hospitals, and other public amenities would likely also be affected. If this were to happen in Zimbabwe, with its unresolved tensions, the potential chaos and violence would be substantial. As we have witnessed in other sub-Saharan countries, large swathes of the population could be forced to flee to neighbouring countries, resulting in a humanitarian crisis.

What civil society can do to avoid violent conflict in Zimbabwe

It is vital that Zimbabwean civil society preaches nonviolence
It is vital that Zimbabwean civil society preaches nonviolence. Violence creates chaos, and advantage could be taken to cause atrocities. We should learn from our war of liberation, where very little of what we destroyed was repaired after independence. We need to keep uppermost in our minds what the international community has continuously repeated: that Zimbabweans should solve their own problems. It is important that civil society groups stick to their role, that of complementing government efforts, not opposing it publicly. That would exacerbate violence. Every organisation should have emergency kits in place to respond to the first signs of violence. Shelter, food, and water must be provided for people in the event of a crisis. Communication networks must be established to aid rapid responses to outbreaks of violence.

Violent conflict in Zimbabwe is a real possibility. It may seem unlikely because of the surface calm. While history has taught us that revolutions rarely take place without blood loss, we should remember that this is the 21st Century, and more civilised methods should be used. The USSR fell without a single bullet fired, and Germany reunited without violence. Nonviolence is more powerful than violence. The only good thing that has come out of violence is negotiation. One wonders why people don’t go straight to the negotiation table.