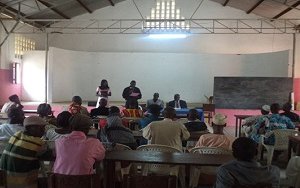 Conflict resolution training in Gore, Chad. Image credit: Bouyo Séverin.
Goré borders the Central African Republic and is host to numerous refugees and returnees
From April 24th to the April 25th, the Délégation régionale du sud de l’Association pour la Promotion des Libertés Fondamentales au Tchad (Regional Delegation in the South of the Association for the Promotion of Fundamental Rights in Chad, APLFT) organised a peace training programme for community leaders and administrative, military, religious and authorities in Goré. The focus of the programme, which took place in the context of a Swissaid-funded project to prevent violence, was on different mechanisms of conflict resolution. Goré is a town in the Logone Oriental Region of Chad, bordering the Central African Republic (CAR), and is a host to numerous CAR refugees and returnees.

Conflict typology and diverse sources of conflict in Goré

The APLFT recruited two consultants that were in charge of hosting the event. These two consultants used participatory methods that enabled attendees to exchange openly and frankly in group assignments and discussions. Participants were divided into four groups and each of these groups worked on two different series of themes. The first series was composed of questions in relation to conflict analyses. This series of questions led to a discussion around religious freedoms and rivalry between government officials, which has played a key role in conflicts in the area. The issue of unequal salaries and the role of personal relationships in recruitment is also a source of conflict within the professions.

The participating groups also noted that intra-group conflicts are often linked to topics such as access to land and water, marriage, entertainment and community facilities. These conflicts are usually the result of geographic limitations, insufficient water supplies and questions on land distribution, jealousy, witchery and local customs. These conflicts are also often due to misunderstandings, lack of trust, education, negligence in children’s rights, and sibling rivalry.

The second series of questions discussed was related to conflict resolution mechanisms. Participants mentioned ideas of conciliation and meditation as traditional methods for conflict resolution, as well as familial love, hospitality, social assistance, and being friendly to family members and neighbours.  But they also mentioned that sometimes violent means are resorted to - corporal punishment, intimidation and war.

At the source of the reason for this peace training is the concern for peaceful coexistence between the host community and the CAR refugees/returnees. This article was drafted with elements collected with APLFT’s Regional Delegate in the South, Mr. Djouman Victor.

But there has been lower-level social discontent as well. For example, according to the president of the student's representative committee, a total of six people were injured after a student protest, also in April, was disbanded by the police.

The reason for the demonstration was, again according to the student’s representative committee, the non-payment of 6 months’ of student grants – 2 months in 2013-2014 and 4 months in 2014-2015. Prior to this turmoil, many actions had been conducted in front of the national student welfare office but, they have remained unanswered. Consequently and in a general meeting, the student body decided to organise a protest. It was also decided that any form of student or hospital activity would cease from 27 April.

It is important to note that this was not the only protest. There was another student strike in Doba, capital of the oil production region in Chad, when they demanded that two broken down school buses to be repaired. Additionally, a couple weeks ago prior to the student strike in Doba, teachers had also initiated a strike aiming to pressure the government into the payment of their salary of the month of March 2015. The teachers took action with the support of the student body. Finally, the retired population and their beneficiaries also protested in order to address discontent linked the non-payment of their pension. As it stands, teachers and retirees have started receiving payment. But the threat of other action remains present. Indeed, the students have since passed a statement to demand payment of 6 months of their scholarships in arrears.

At the same time, in the Moyen-Chari Region of Chad, a confrontation between the police and locals resulted in 3 deaths and many others injured, 8 of which were admitted to the area’s medical centre. The situation began when a security guard was accused of stealing the shop owner’s cellular phone. He was arrested and detained at the police office, and died a couple hours later. When the family of the deceased requested the body, the police refused. Out of frustration, the family started burning down shops and attacking policemen as well as other law enforcers. In return, armed forces began shooting at people.

The government’s ongoing silence regarding this general issue is leaving the population very perplexed. Chad’s civil society and opposing political parties, organised in a coalition named “trop c’est trop” (enough is enough), have begun to take action. It is feared that the situation will escalate if nothing is said and done to calm things down or to find a lasting solution to this crisis.

On all these issues, local peacebuilders in Chad are working to build peace and prevent violence. The Chad section of Insight on Conflict now features profiles of 20 local peacebuilding organisations. They are performing vital work, across the country.